EIA: US exports crude oil to more destinations than it imports from

As US crude oil export volumes have increased to an average of 2.8 million barrels per day (b/d) in the first seven months of 2019, the number of destinations (which includes countries, territories, autonomous regions, and other administrative regions) that receive US exports has also increased, according to EIA.

In 2009, the US imported crude oil from as many as of 37 sources per month. In the first seven months of 2019, the largest number of sources in any month fell to 27.

This rise in US export destinations coincides with the late 2015 lifting of restrictions on exporting domestic crude oil. 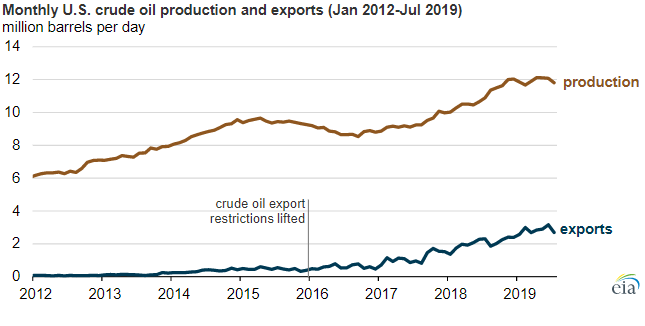 Before the restrictions were lifted, US crude oil exports almost exclusively went to Canada.

The United States has also been importing crude oil from fewer of these sources largely because of the increase in domestic crude oil production.

Most of this increase has been relatively light-sweet crude oil, but most US refineries are configured to process medium- to heavy-sour crude oil.

US refineries have accommodated this increase in production by displacing imports of light and medium crude oils from countries other than Canada and by increasing refinery utilization rates.

Conversely, the United States has exported crude oil to more destinations because of growing demand for light-sweet crude oil abroad.

Several infrastructure changes have allowed the United States to export this crude oil.

New, expanded, or reversed pipelines have been delivering crude oil from production centers to export terminals.

Many of the less complex refineries outside of the US cannot process and remove sulfur from heavy-sour crude oils and are better suited to process light-sweet crude oil into transportation fuels with lower sulphur content.