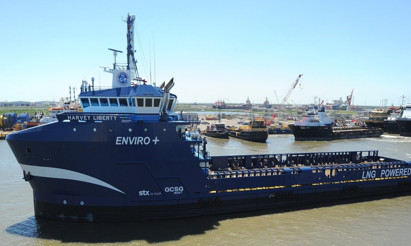 Shell chartered the ship, the Harvey Liberty (pictured), to supply its deep-water exploration and production activities in the Gulf of Mexico with diesel fuel, methanol, and other supplies. These three U.S.-flagged ships and North America’s first LNG marine fueling terminal—which Harvey Gulf opened in January 2016 at Port Fourchon, Louisiana—are part of a larger plan by Harvey Gulf to grow its LNG-fueled fleet. The company is currently constructing three additional LNG-fueled vessels, each with a 78,000 gallons LNG fuel tank, enough for up to 15 days of operations.

Recent announcements in the U.S. and globally of orders for, or completions of, LNG-fueled vessels suggest growing interest in LNG as a maritime fuel. There are several reasons for this; for example, LNG prices remain below petroleum-product prices in energy-equivalent terms, despite the rapid fall in crude oil prices since the second half of 2014. Furthermore, because of tightening U.S. and international maritime emissions standards, shipping fleet operators may, shipping fleet operators may adopt relatively cleaner-burning LNG as a fuel instead of distillate. This is especially true for vessels that frequent regions—including most of the U.S. and Canadian coastline designated as Emission Control Areas by the International Maritime Organization.

Currently there are fewer than 10 ocean-capable, U.S.-flagged LNG-fueled ships, but at least 8 are set to be launched over the next 3 years.

The fleet includes ships from General Dynamics NASSCO, in San Diego. General Dynamics previously built two primarily LNG-powered container ships for TOTE Maritime, and is under contract to convert two of TOTE’s diesel-powered vessels to run on LNG. Additionally, there are several ships designed to be LNG-conversion-ready. LNG-ready vessels, which in the near-term will run on distillate, are certified for ready conversion to LNG power. This option allows companies to put off investing in potentially expensive on board LNG storage capacity until fueling infrastructure is more widely available in the United States.

Among plans for LNG-ready ships are: