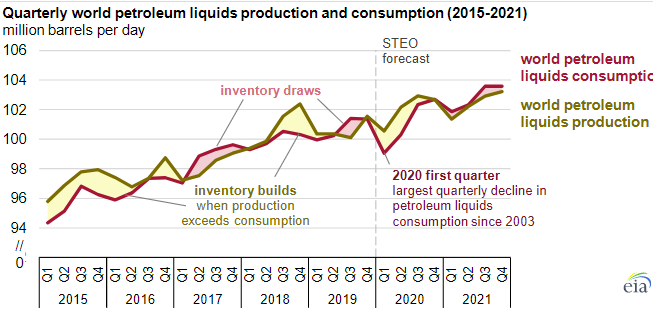 The US Energy Information Administration (EIA) has focused on several underlying assumptions about OPEC’s posture regarding targeted production output and what effect it may have on global oil balances and prices.

Oil markets have experienced significant volatility and price declines since the final week in February amid COVID-19 and, more recently, markets fell after OPEC and partners failed to reach an agreement to continue crude oil production cuts.

In this regard, in its March Short-Term Energy Outlook (STEO), EIA forecasts:

After the March 6 meeting, OPEC and partner countries announced that they did not agree to extend production cuts beyond those currently expiring March 31.

EIA no longer expects active production management to target balanced global oil markets among OPEC members and partner countries. These countries have been limiting production under the Declaration of Cooperation, initially agreed to in December 2016.

Although this growth is a relatively small increase in a market where global production exceeded 100 million b/d in 2019, this production level represents a marked change from recent production targets that were focused on keeping global inventories near the five-year (2015–19) average.

OPEC’s current strategy appears to be focused on regaining market share by elevating production levels to the point that the resulting depressed prices limit production growth from other market participants, particularly non-OPEC producers. In addition, the increase in OPEC production is significant in light of the downward revisions to the outlook for global demand resulting from COVID-19.

In recent STEO forecasts, EIA adjusted the outlook for OPEC total liquids supply based on changes in demand and non-OPEC supply to maintain global inventories that were at or near the five-year average.

In the March STEO, EIA no longer assumes that OPEC production levels will follow such a pattern and now expects significant inventory builds through 2020.

When OPEC output exceeds the call on OPEC, global inventories increase, much like in 2014 through the end of 2016. From 2017 through 2019, the call on OPEC steadily declined as non-OPEC production, primarily in the United States, grew significantly.

EIA forecasts OPEC production will exceed the call on OPEC in 2020—largely because of the significant decline in global liquids demand—contributing to inventory builds.

Production levels targeted by OPEC amid low oil demand are very uncertain, and realized levels will have a significant effect on crude oil prices.

Because OPEC surplus capacity is more than 2.0 million b/d, member countries could produce far more than EIA currently forecasts, which would lead to larger inventory builds and put downward pressure on prices. 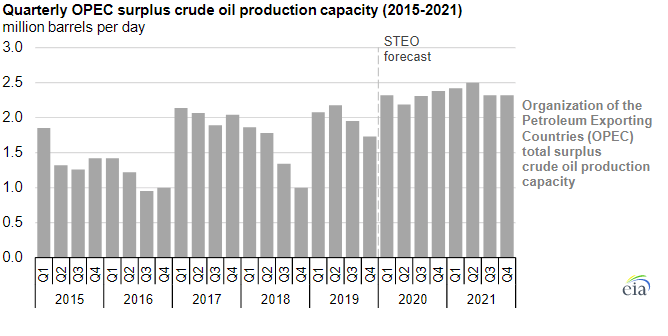 On the other hand, higher-than-expected crude oil production outages could reduce supply and put upward pressure on prices.