EIA: Crude-by-rail volumes to the East Coast are declining 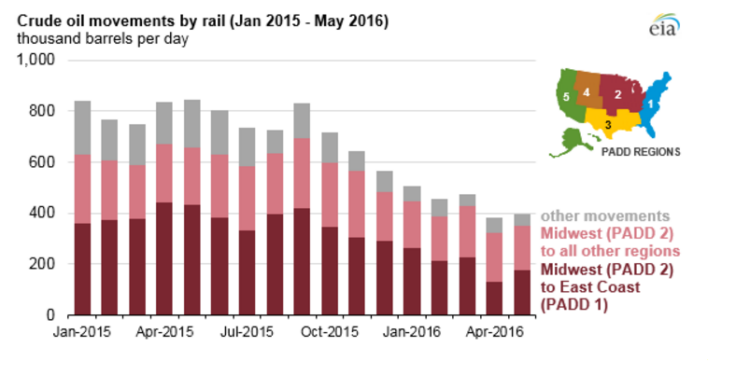 US EIA has announced that movements of crude oil by rail within the United States averaged 443,000 barrels per day (b/d) in the first five months of 2016, down 45% from the same period last year.

Fewer shipments of crude oil by rail from the Midwest (PADD 2) to the East Coast (PADD 1) account for about half of the decline. Crude oil shipments by rail have generally decreased since last summer for several reasons, including narrowing price differences between domestic and imported crude oil, the opening of new crude oil pipelines, and declining domestic production in the Midwest and Gulf Coast onshore regions.

Crude oil carried by rail from the Midwest to the East Coast remains the country’s largest crude-by-rail movement at 176,000 b/d, or 45% of the total crude oil moved by rail within the United States in May 2016. Crude oil imports processed by East Coast refineries have generally increased since early 2015, averaging 760,000 b/d in May 2016, up from 666,000 b/d in May of last year.

EIA develops the crude oil and biofuels rail movement data using information provided by the Surface Transportation Board (STB), along with data from Canada’s National Energy Board, other third-party sources, and several EIA surveys. EIA’s energy-by-rail data are subject to revision as new information becomes available, especially the most recent one to three months of rail data from the STB.