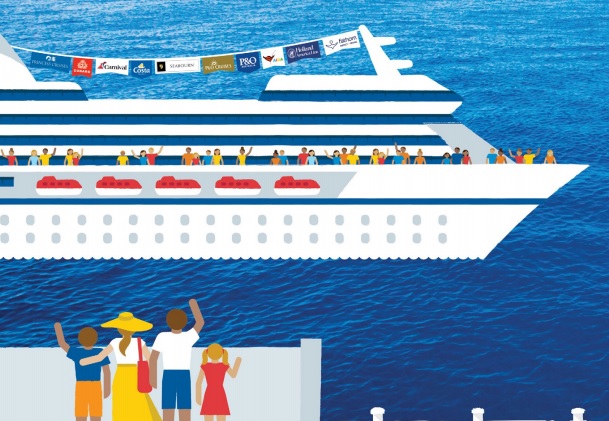 Mr. Franco Porcellacchia, Vice President, Ship Refit, Carnival gave a presentation entitled the “EGCSs and LNG ships” at the GREEN4SEA Conference. He described Carnival’s strategy in terms of fuel consumption, LNG and scrubbers. Mr. Porcellacchia further addressed why the LNG is the best way to comply with environmental regulations and which are the challenges when compared to HFO & EGCS. Mr. Porcellacchia explained the Carnival’s LNG Journey, the reason why they decided to scrub as well as the EGCS Project.

Carnival, as the biggest operator in the field of cruise ships, these days operates 102 ships under different brands. The company further has 20 newbuilding; some of them are under construction and will be delivered in the next few years. The following chart shows the results of Carnival’s strategy which started about 10 years ago regarding fuel conservation.

Specifically, we observe that in 2007 the average consumption in kilogram per person carried each day was at the 56. Thus, for carrying one person each day on a Carnival Ship, 56 kg of fuel were needed. Consequently, the company decided to implement a strategy to make their ships more efficient and to look at the itineraries as well. They looked at all the ships’ characteristics; different types of vessels; classes of vessels. First and foremost they looked at the itineraries but also at the efficiency of the ships from all the aspects. Specifically they tried to resist the drag to reduce it; they looked at the painting; sometimes they changed propellers or even the modification to the bulbous bow; the ventilation and the air-conditioning. The result is still going on as the modification takes some time before it can be implemented and the strategy was to implement the idea on a couple of ships, see the result and decide whether this implementation was appropriate to be done on the rest of the ships.

In ten years the average fuel needed downed to 40kg from 56kg. This number means 30% reduction. At the beginning of the key performance, they had in mind to achieve this result, however, it was far from being granted. Although the company achieved this result, believes that there is way to go to reach an even a better result in the future.

As mentioned above, there are 20 ships that are either in the contract or under construction. Seven ships among those are going to be propelled with LNG. This means that they will carry LNG while they will be sailing and this is a giant step because they decided and converted themselves to the idea of LNG. Certainly, this action is not possible to be done on an existing vessel.

Carnival studied with a very important shipyard for the concept of a new type of vessel carrying on its own LNG and then they came up with an order for seven ships.

Going for a new platform of ships design with LNG is not an easy decision, because it needs to take into account several factors. It is a decision oriented toward the environmental because, from an economic point of view, this is arguable. LNG fuel costs are not clear yet; they might be higher at today’s prices than HFO. Furthermore, the initial capex is higher, and space usage is not as efficient as other type of vessel.

Initially ships might be constrained to itineraries where LNG bunker supply is available. Moreover, the company’s bunker supply needs are significant when compared to ferries and coastal traffic (1500m3 per week). However, bunkering locations need to develop strategically. Local regulations are inconsistent when it comes to bunkering and industry has to work together.

To sum up, the company started this strategy in 2013 when investigations into retrofit were undertaken. Later in 2015 an LNG fuelled Power Barge in Hamburg delivered electricity to AIDAsol. In 2016, AIDAprima was delivered for operation in North Europe and used LNG while in port. One year Later, AIDAperla – sister to Prima with one Dual Fuel engine operated in West Med. These sister vessels will carry their own fuel; LNG. They will have the engine ready to use LNG, but the LNG will be provided from shore through movable tracks or barges. The final step of this journey is the delivery of 7 new cruise ships: the first in the cruise industry to operate on LNG at all times - new XL platform: 2 for Aida Cruises, 2 for Costa Cruises, 2 CCL and 1 CUK. In 2018 the first vessel with LNG will enter into service while all the vessels will be delivered within 2022.

For the rest of the world, it will become compulsory starting from the 1st January 2020. As far as the shipping operation is concerned, LNG conversion of an existing ship is almost impossible. However, in order to comply with the regulation regarding the existing ships, the company decided to scrub. Thus, half a billion dollars are bound to be invested over six years for the EGCS Project. 69 ships have been already fitted with EGC Systems and everyday there is one more. The implementation is being step by step. Specifically, 175 scrubbers have been installed by the end of March 2017. As of now the company believes that it is half way through on what they want to achieve by the entry into force of the more stringent regulation and extension of ECA area.

Carnival decided to go for a certain type of scrubber which is open loop. The image herebelow shows the simple description of the main systems components.

The Compliance Monitoring Equipment is used to monitor the Compliance Parameters for Exhaust Emissions and EGCS wash-water. The picture below shows what kind of control there is on this type of system.

Gas Analyzer measures the SO2 and CO2 content of the exhaust gases which allows the SO2/CO2 ratio to be calculated.

Sea Suction Rack (Rack 1) measures the PAH and Turbidity of the inlet wash-water at the sea suction. Although not required for compliance, on some systems pH is also measured.

DeSOx Outlet Rack (Rack 2) measures the PAH and Turbidity of the wash-water at the outlet of the DeSOx Tower.

Overboard Discharge Rack (Rack 3) measures the pH of the wash-water at the overboard discharge.

Discharge Tank (Rack 4) is not compliance equipment and performs no monitoring. It collects water from Racks 2 and 3 before pumping it to the Overboard.

Below is presented a very simple example of why Carnival decided to scrub. Costa Pacifica is a 114.000 GT vessel; diesel electric and carries 4000 passengers. The ship has four diesel engines and its generation system is made of six diesel generators (DDGG) each one of 12.6 MW. An average profile shows that Costa Pacifica stays 16 hours at the sea and 8 hours in the port. Thus, taking into account its speed, power and fuel consumption the saving opportunity is very close to 23.520 $ per day.

Franco Porcellacchia was born in Genova on 30th April 1953.

After graduating from the University of Genoa with a degree in Naval Architecture and Mechanical Engineering in 1979, Franco commenced his career with RINA, the Italian Naval Classification Society, holding several roles in the field of ship classification and safety both in Italy and the US.

In January 2002, after a 22-year career with RINA, Franco joined Costa Crociere S.p.A., where he was assigned responsibility for all the company’s technical activities as Vice President and Director of Technical Operations, managing Costa Crociere’s fleet of twelve cruise ships and overseeing the construction of a further 5 vessels.

In 2012 he was appointed to lead the Ship Owner’s team in the Costa Concordia Wreck Removal Project, with the task of coordinating all the project activities at Isola del Giglio on behalf of Carnival/Costa Crociere. He was responsible for overseeing the engineering design for the wreck removal completed in July 2014, as well as for the subsequent activities for the site seabed recovery currently ongoing, ensuring their compliance with health and safety, and acting as link between the parties involved: the Salvors, the Insurers and their Technical Consultants, the Italian Authorities.

Currently Franco is involved, on behalf of Carnival Corporation, in its program of exhaust gas cleaning system installations on board of a large number of vessels for all of the group’s Operating Lines.