ECSA: Measures to bolster maritime security in Gulf of Guinea

Following the latest piracy figures from International Maritime Bureau (IMB), European shipowners expressed concerns about the escalating rate of piracy incidents  in the Gulf of Guinea and issued a position paper urging the EU authorities to step up their measures to improve security in the area.

The EU’s engagements with the coastal states and its Member States’ active contributions outside territorial waters – such as the deployment of warships – are much needed to mitigate the current situation,

The latest International Maritime Bureau (IMB)’s Piracy & Armed Robbery Report revealed that the Gulf of Guinea accounted for 86% of the 49 crew taken hostage and 82% of the 70 crew kidnapped globally.

The perilous circumstances in the Gulf of Guinea raise alarm bells for the safety and security of seafarers sailing through that area. The threats are also putting at risk trade and development both in the region and globally. It is time EU Member States step up their efforts to strengthen maritime security in the Gulf,

As such, ECSA called upon the European policymakers to adopt a number of measures outlined in its recently adopted position paper, so that vessels and crew can operate in a safe and secure environment.

These include a proposed engagement of the EU with the Gulf of Guinea governments in order to find a solution on the ground.

The EU should put maritime security high on the agenda of partnership and trade agreements, as well as other forms of cooperation with African partners.

In addition, ECSA proposed an active contribution of the EU Member States to the maritime security outside the territorial waters in cooperation with regional states e.g. by deployment of warships, and the establishment of a SHADE-GoG as a mechanism to increase information sharing and coordinate anti-piracy operations off Nigeria and in the wider Gulf of Guinea.

Other proposed measures include the introduction of a high-level international response, similar to the Contact Group on Piracy off Somalia and the continuation of the EU GoGIN project (Inter-regional Network for the Gulf of Guinea) which facilitates the cooperation between the 19 GoG coastal countries.

Moreover, ECSA called on the EU to call upon and support coastal states on issues such as: 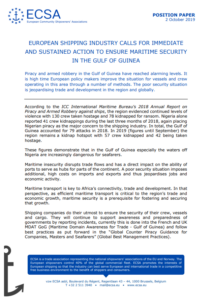