ECSA conducted a survey, analyzing the economic impacts of the COVID-19 on the shipping industry, noting that important segments of the European shipping industry are heavily impacted, and European or national measures are not always available in all member states to alleviate the situation.

The European shipping has been facing the challenges of the pandemic, while shipping companies, charterers, operators, shipowners, crew as well as onshore staff are all dealing with mounting difficulties in continuing their operations.

Therefore, to gasp what the economic impact has been, ECSA conducted a survey in April 2020 among its members’ companies.

Except tankers, the rest of the segments reported significant immediate losses. The survey revealed that the worst impacted are ferries, cruises, car carriers and offshore service vessels. In addition, the turnover declne reached higher than 60%. Respondents signalled that some recovery is expected in the rest of the year compared to the immediate economic impact, however turnover losses remain significant throughout the industry – except for the tanker sector.

In the meantime, seafarers' employment and office personnel situation follows the same path, experiencing a sharp decrease of seafarers in the most impacted segments and less so for office personnel.

The lack of national, regional or locak measures implemented was a challenge that arose from the suvey, with the report stating that the measures implemented are against liquidity issues or that these are not applicable to the shipping industry. In the case where measures exist, banks do not offer those options in practice; and when they do, the administrative burden and costs outperform the benefits.

The survey highlights that

A worrying trend is that the hardest-hit segments most in need of financial assistance are the ones not receiving them.

Given the heavy toll on financing and employment, the shipping industry will not have a full return to the pre-crisis sitation in the course of 2020.

Although more than half of the companies that responded maintained a positive outlook for the return to the pre-crisis level of employment, planned investments will either have to be cancelled or put on hold. This is certainly the case for investments in the reduction of air emissions: only 26% think they are able to go ahead as planned, 30% would proceed at a lesser extent, while 44% are no longer able to make such investments.

This is a major setback for the industry, which is fully aligned with the IMO’s 2050 CO2 reduction targets, and has since the new European Commission took office been supportive of the EU’s ambition to be the world’s first carbon-neutral continent. 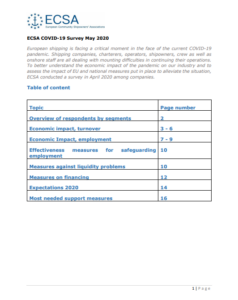