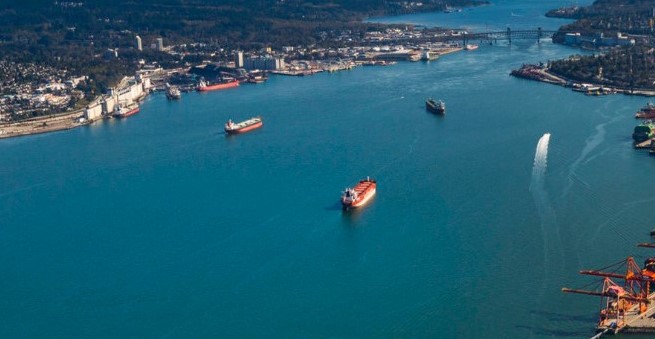 During this year’s seasonal measures, which ran from June 1 to October 31, a record-breaking 86% of all large commercial ships slowed down or stayed distanced while transiting through key areas of southern resident killer whale critical habitat at Swiftsure Bank, Haro Strait and Boundary Pass, and the Strait of Juan de Fuca.

Altogether, more than 80 marine transportation organizations participated in these measures, which covered nearly 80 nautical miles of the Salish Sea.

This year, the ECHO Program’s positive impact not only spanned across the largest geographical area to date—80 nautical miles of southern resident killer whale critical habitat—it also benefited from the highest-ever participation rates by the marine transportation industry to date, in support of an iconic endangered species

Launched in 2014, the ECHO Program is one of the ways the port authority works to fulfil its mandate to enable Canada’s trade through the Port of Vancouver while protecting the environment and considering local communities.

In collaboration with government, the marine transportation industry, Indigenous communities, and environmental organizations, the ECHO Program works to reduce the cumulative impacts of commercial shipping on at-risk whales, with a particular focus on reducing underwater noise, one of the four key threats to southern resident killer whales.

Notably this year, in the ECHO Program’s lateral displacement for tugs in the Strait of Juan de Fuca, tug operators participated at a record-breaking rate of 97%—a 9% increase from the previous record of 88%—while in the Haro Strait and Boundary Pass slowdown, a record-breaking 93% of large commercial ships slowed down while transiting through this known area of importance to southern resident killer whales.

In the Swiftsure Bank slowdown trial, which was expanded this year to include both the inbound and outbound shipping lanes, 82% of all large commercial ships slowed down while transiting through this known southern resident killer whale foraging area.

Even though participating in the ECHO Program’s measures adds extra time to ships’ journeys or requires them to take an alternate route, this year, more than 85% of all large commercial ships voluntarily participated in these important efforts to reduce disturbance to endangered whales in our region

In 2021, as a result of the strong participation rates in the ECHO Program’s voluntary measures, underwater sound intensity was reduced by up to 55% in key foraging areas for the southern resident killer whales.

In spring or summer 2023, the ECHO Program will publish results on the underwater sound intensity reductions achieved as a result of its 2022 measures.