Activity in the Dutch maritime technology sector, increased slightly in 2018. Total turnover rose to €7.3 billion, about €400 million more than 2017. The total employment was 29,072 FTEs, which marks an expansion of about 4% compared to 2017.

Bas Ort, chair of the trade association Netherlands Maritime Technology (NMT), noted that many new orders were received and ships completed in the Netherlands during 2018. He explains that this indicates the country's perseverance to attract orders for new types of ships.

NMT reported minor improvements in the Netherlands in 2018 compared to 2017, both for Dutch yards and suppliers.

A small step forward but not one that came easy to the sector, which is being more creative than ever

The figures for 2018 report that the recovery of the order intake in the construction of seagoing vessels in the Netherlands has stalled. In 2018, the yards received build contracts for 39 vessels, while in 2017 the same number was 56. The reduction in the number of orders is mainly because of a decrease in new orders for tugs and workboats. 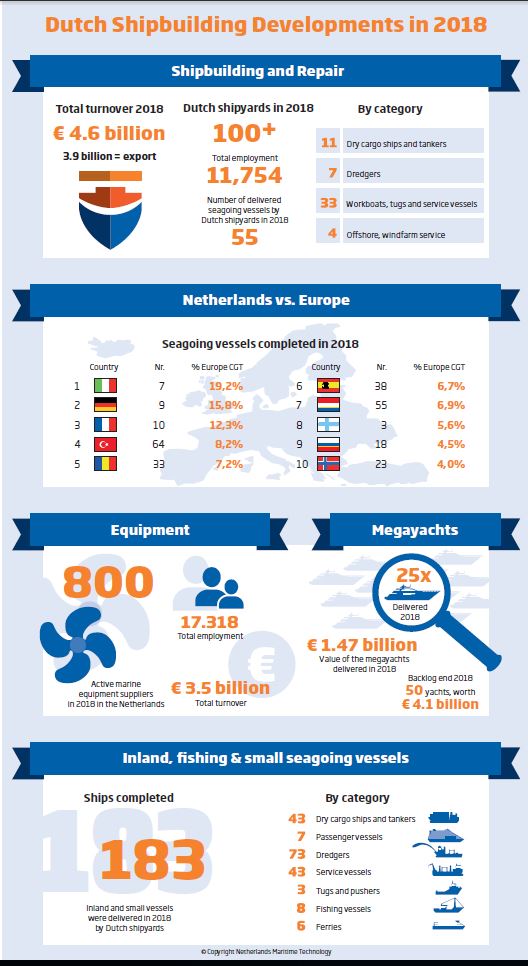 What is more, the trend for sustainability and digitisation resumed in 2018. These areas can enhance the sector's competitive position, as was the case in 2018. The maritime turnover of the approximately 800 Dutch maritime suppliers was €3.5 billion in 2018, a growth of 4.3% in comparison to 2017.

On the other hands, the downward trend in the overall turnover of Dutch repair sites was broken in 2018 for the first time in several years, despite this cannot yet be described as a convincing recovery, NMT stated.

As for inland navigation, fishing and small seagoing vessels, this category did good business in 2018, with the dry docks and quaysides being continuously busy. The order intake of luxury river cruise vessels especially increased over the previous year, while a great amount of maintenance work was conducted.

Finally, the size and value of superyachts continued to increase. Yacht builders are expecting that this development will continue and are constructing new production facilities that can handle larger vessels. 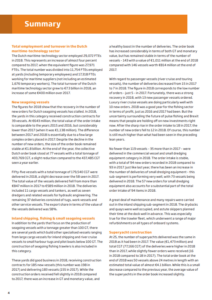