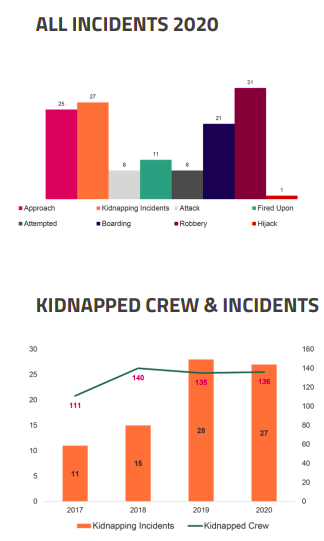 Incidents of low-level maritime crime, particularly robberies (most often in port and at anchor), continue to be the most prevalent incident type recorded throughout West Africa. Limited ISPS implementation and increasing rates of economic deprivation are likely to result in a partial increase of similar incidents into 2021.

Incidents of kidnap for ransom remain the most significant risk to maritime operators throughout the Gulf of Guinea.

Incidents of kidnapping for ransom of offshore personnel remain unacceptably high within the Gulf of Guinea, the global heartland of this issue. Kidnapping and ransom are complex operations for criminal elements requiring significant resources and freedom of movement both on and offshore. Volumes of personnel kidnapped from vessels is indicative of pirates operating with a substantial degree of capability and intent in the Gulf of Guinea.

Far too often successful attacks are assessed in light of pirates achieving their intended aim. This approach fails to account for the prevalence of issues that continue to have potentially significant commercial and safety impacts on vessels and crews.

An analysis of all offshore incidents that can reasonably be said to have compromised vessel or crew safety within 2020 strongly indicates that in most offshore incidents vessel safety was tangibly at risk of damage or loss, irrespective of whether pirates failed to achieve their aim of kidnapping crew. The prevalence of successful attacks is indicative of impotent regional counter-piracy initiatives and a worrying lack of mitigation operations for commercial operators.

The dominance of incidents of significant maritime crime and piracy in comparison to low complexity and opportunistic incidents such as robbery, is indicative of a deeply systemic issue within the Gulf of Guinea.

Incidents of serious maritime crime and piracy continue to be underpinned by complex onshore conditions, including corruption, poor governance, and weak legislative frameworks, and are fuelled by limited counter-piracy resources and poor coordination. 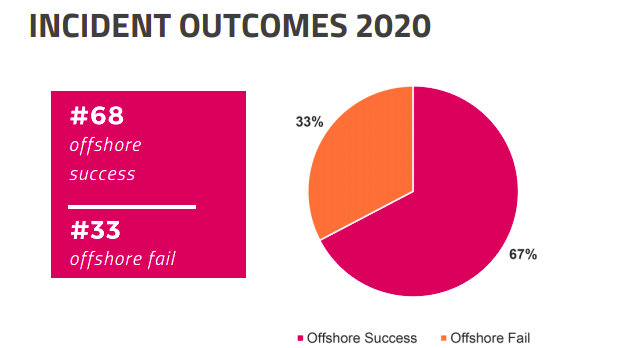 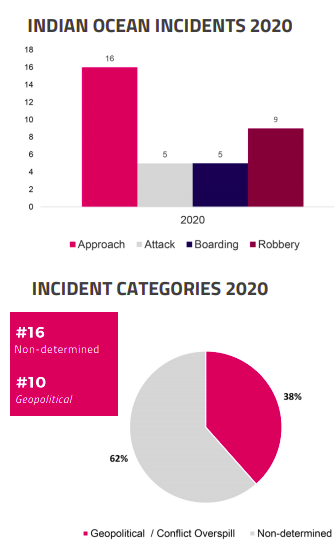 Incidents reporting in the Indian Ocean throughout 2020 show that the volume of incidents remains low, across all incident classifications. Reporting themes signify a fundamental shift in the risk profile within the Indian Ocean, from one of piracy and maritime crime to one of geo-political turbulence and conflict overspill.

Whilst the region continues to be influenced by complex security dynamics, 2020 saw further confirmation of the shift in the maritime risk profile in the Indian Ocean from one underpinned by acts of piracy to one more influenced by geopolitical uncertainty and conflict overspill. Incidents designated as undetermined held neither characteristics corresponding with geopolitical events or piracy.

Incidents across a 4-year timeframe indicate a general decline in incident volumes. Despite this, incidents of robbery have remained moderately consistent throughout the region.

Incidents indicative of acts of piracy have declined significantly across a 4-year timeframe, a trend further confirmed when analysed against thematic reporting of regional events. 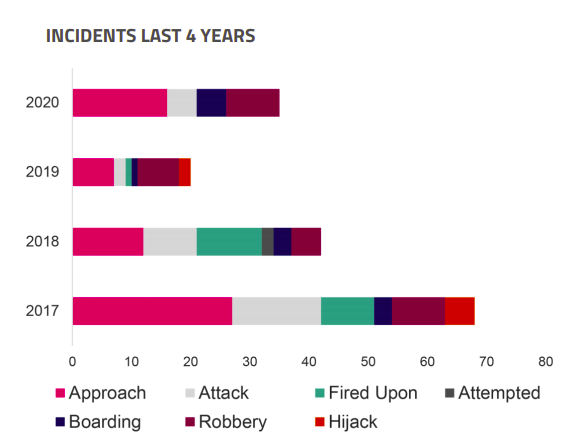 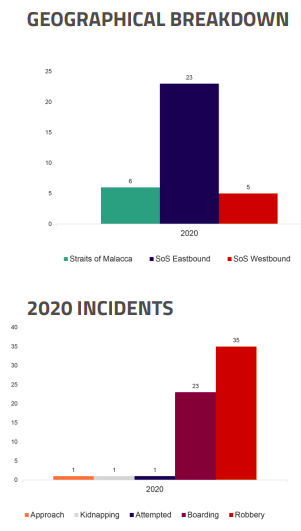 With the highest density of maritime traffic in the region, the Straits of Malacca and Singapore are the focal point of maritime crime in South East Asia. The confluence of nearby economic disparity, population density, and a narrow geographic passage, creates ample opportunity for vessel robbery in the SoM & S. The lack of kidnapping and vessel hijackings is indicative of the low-level petty, poverty-induced nature of maritime crime in the region.

2020 data shows that South East Asia continues to be the global heartland of low level maritime crime within 2020.

Incidents of vessel boarding and robbery are predominantly localised within the Straits of Malacca and Singapore, and Manila in the Philippines. The relatively high volume of incidents within a comparatively small geographic area signals a potential requirement for strengthening multilateral regional monitoring and pooling of maritime security resources.

Reporting trends within South East Asia continue to be disproportionately driven by incidents of low-level maritime crime. The confluence of a high volume of opportunistic targets and significant wealth inequality among the littoral states in the region are likely to be primary drivers of such activity. 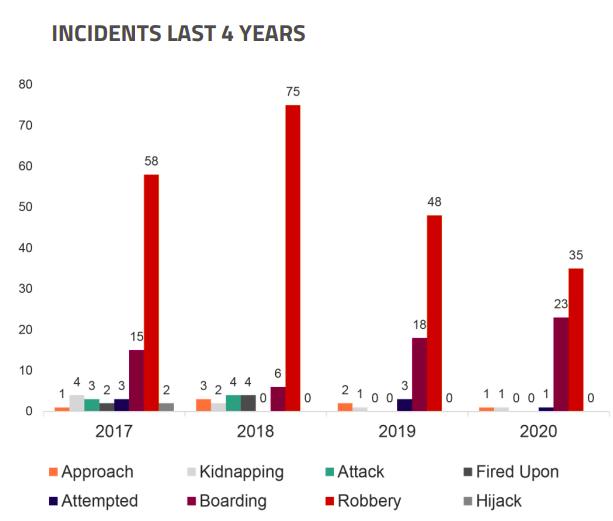