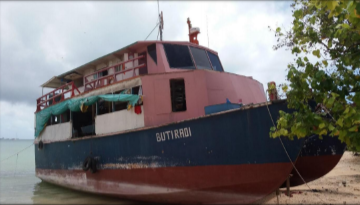 An independent commission issued an accident report concerning the loss of the ferry MV Butiraoi which was produced in response to the very strong calls from the public including the Kiribati House of Parliament, demanding answers to a number of very critical issues in relation to the foundering of the MV Butiraoi off the coast of Nonouti on Thursday, 18 January 2018.

The MV Buitaroi, a 17.4-metre catamaran licensed to carry passengers and cargo within the Gilbert Group of Islands in Kiribati, departed from Matang on the island of Nonouti with 89 passengers and 13 crew aboard at around 1000 on 18 January 2018, despite a notice issued by the Marine Office prohibiting it from carrying any passengers. Whatsoever, the vessel was further loaded with 29.5 tons of copra and thirty-five empty fuel drums.

When entered the open sea, the vessel started experiencing 10 to 15-knot easterly wind which created waves up to 2.5 meter high, and pitching and pounding as it headed towards the waves.

After already being 30 minutes into the open sea, the main structural cross-beams that held the twin hulls began to separate and the superstructure that formed the upper cabin areas and wheelhouse collapsed inwards.

The passengers and the crew worked together to launch the two 23-people life rafts and the vessel’s two aluminum workboats. One of the life rafts punctured on the wreckage rendering it unusable. When people in the water climbed onto and crowded the second life raft, the floor failed, leaving only the inflated tubes to hang onto. It is estimated that almost 30 people managed to put the lifejackets before the ship broke apart.

Furthermore, the master remained on the capsized hull with some people and refused to join the rest of his crew when called by his chief mate.

At around midnight, during the third day of drifting, one of the aluminum boats capsized and sank. Fortunately, the chief mate cut the rope which tied the two vessels together, preventing from the other one to sink as well.

With hardly any food or water the survivors began to perish and dwindle in number.

After eight days of drifting, the vessel was recognized as overdue in Betio and missing. A search operation was initiated and the remaining aluminum boat was spotted and located by a search aircraft, two days later at 1530 hours on 28 January 2018. Only seven survivors remained and were rescued, the other 95 are still unaccounted for.

The investigation showed that the MV broke down because of the structural failure probably due to its recent groundings and poor maintenance record. It was also found that the vessel was overloaded with people and cargo, which further contributed to the disaster. In addition to that, the investigation found that the rough weather and heavy seas that the MV Buitaroi went through, contributed to the ship breaking apart.

Moreover, it is stated that the vessel was not licensed to carry passengers in the open ocean, and as the investigators found, the crew had also been consuming alcohol.

The master failed to report to the Marine Guard before the vessel broke apart and thus nobody was aware of what was happening, and furthermore, the emergency position-indicating radio beacon was either not activated or not working.

The commission suggested the establishment of a mechanism or national guideline in order to standardize boat building requirements in Kiribati to essential standards, including the provision of a qualified national authority to provide approval to such requirements at every stage of the building process, including the capacity to survey and approve both steel and wooden boats.

Additionally, existing maritime regulations should be strengthened including active involvement of Police Maritime Unit and imposing penalties as appropriate.

Regulations should be put in place in order to have operators and owners equally accountable and have shared responsibilities to all operational aspect of the vessel.

Furthermore, the recruitment of master and crew for private and government owned vessels needs to be approved by registered by the Marine Division to have all the necessary skills experience training needed for all safety reasons at sea.

The master should send reports about any damages occurring during each voyage immediately to the Marine Division and to the operator or owner in order for corrective actions to be taken in due time and prohibiting travel prior to inspection, assessment and recommendations or instructions issued by the marine division.

Moreover, the use of alcohol during office hours is prohibited and owners or operators should institute appropriate penalties accordingly.

The commission also recommended, among others, that life-saving appliances for both adults and children should be provided in sufficient numbers in line with the vessel’s requirements and sea worthiness that must be regularly inspected and permanently marked with the ship’s name.