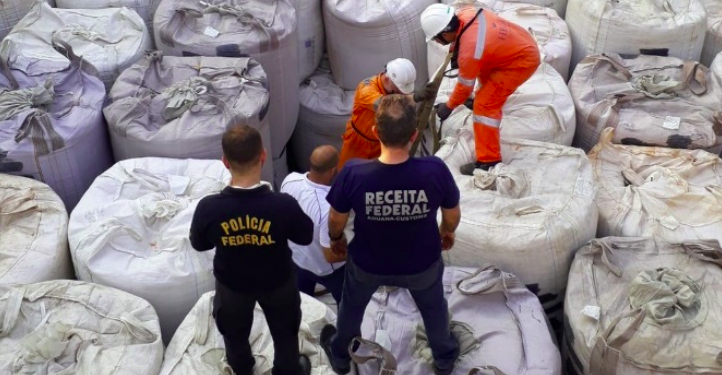 Data by Brazilian police and customs authorities indicate a substantial increase in the number of occurrences and the amounts of cocaine interdicted in port facilities and aboard vessels, a new publication reveals.

The publication, issued by Swedish Club’s correspondents in Brazil, Representacoes Proinde Ltda., informs that Brazil is only behind Colombia in quantities of seized cocaine, while, in some of the incidents, the drug was not discovered until the ship arrived at its destination.

UNODC estimates that global consumption of illicit drugs has increased by more than 30% in the past decade, with about 18 million regular cocaine users worldwide. Although it is not a significant producer of the stimulant drug, Brazil shares extensive unguarded land borders with the three producing countries and is the second-largest cocaine consumer, only second to the US.

While drug shipments from Brazil are moved more and more in containers, there is a noticeable rise in the number of cases involving bulk carriers sailing from grain ports with cocaine buried in the bulk cargo, hidden in void spaces or secured to the vessel’s hull, the publication highlights.

Unlike drugs smuggled inside containers that have neither been packed nor sealed by the carrier, drugs discovered inside the vessel tend to shift the risk of detection – and the resulting criminal liability – to innocent third parties, usually the crew.

While the producers themselves supply most of the North American and Asian markets, Brazil’s many ports in the Amazon and the East Coast and its extensive airport network play a significant role as a transhipment point to ship cocaine between the three Andean countries and established markets in Europe and, more and more, in Africa and Asia.

According to the UNODC, the main flow of cocaine trafficking in the Americas is from Colombia to the US, via the Pacific Ocean or Panama Canal, or by land, through Central America, and then Mexico, where the drug is smuggled into the USA across the southwestern border. The second busiest trafficking flow is from the producing countries, mainly Colombia, straight to Europe. Over the years, Brazil has gained relevance in maritime cocaine trafficking to that continent, either directly or through transit subregions, such as West, Central and Southern Africa.

There are many precautions that masters, officers, and crews can take to increase the level of shipboard security, including:

The crew must inform the Ship Security Officer (SSO) or the master if they are unsure whether a person has a legitimate reason to be on board and deny access to those who refuse or are unable to establish their identity and purpose of visit.

Suspicious activities onboard or in the vicinities of the vessel should be documented, ideally with photos and videos from smartphones, and reported to the SSO, who will consider notifying the PFSO and the port authority.

If a suspicious package or bag is found on board, the vessel must prompt the plan set out in the vessel’s Emergency Contingency Plan (as per the ISM Code) or the SSP (following the ISPS Code). In the absence of any standing guidance in the plan, the crew must observe the following:

Given the globalization and the level of sophistication of modern maritime cocaine trafficking, few ports in the world, if any, can be considered safe and free from attempts by smugglers to use merchant vessels to transport illegal drugs and precursor chemicals.

Shipowners, masters, officers and crews must, therefore, not take risks and bear in mind that drug trafficking is intricately linked to violence and other criminal acts. And the consequences for those engaged in such activities are devasting.