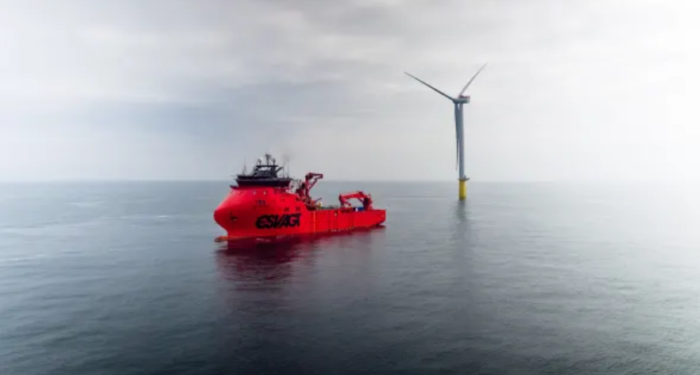 ESVAGT, Siemens Gamesa and Ørsted are cooperating to create a drone-based solution for the delivery of spare parts and tools from vessel to offshore wind turbine. The project ‘Operative package deliveries by drones’ is sponsored by the European Regional Development Fund and runs until June 2020.

ESVAGT’s SOV (Service Operation Vessels) are located in the offshore wind farms and have a wide range of spare options on board. Further innovating the transportation of spare parts and tools from vessel to WTG is the next step. For this reason, the three companies are working on an innovation project, called ‘Operative package deliveries by drones’ that will examine the possibility in meeting offshore WTG technicians’ needs in an easier way.

When we transfer a WTG technician from vessel to WTG, he brings both spare parts and tools with him. But it often happens that the technician needs additional equipment, tools or spare parts while inside the WTG. Today, such a scenario requires the vessel to return to the WTG or that we send a transfer boat over to the WTG with the necessary gear, which the technician then has to get down and get. This process can be optimised

Currently, Siemens Gamesa, Ørsted and ESVAGT work with various subcontractors to find a solution in the innovation project, where drones can deliver packages weighing up to 3-4 kg directly to the WTG nacelle.

The parties aspire to get a drone to transport spare parts between two variable points, following a certain route that will be adjusted along the way.

It is complex, even when using drone pilots, and it becomes even more demanding once you add the changing weight of the cargo, the wind’s impact, the use of magnetic compass in an offshore farm with lots of steel, and so on. But the potential in finding a solution is extremely interesting

ESVAGT is not new to a drone project. Specifically, a year ago, it established the joint venture EWPL Ocean, which inspects offshore WTG blades using drones that are operated and piloted from ESVAGT’s vessels.

Today, ports are either already using drones or are testing the use of drones in many operations. In essence:

The drone conducts day and night flights and is equipped with electro-optical and infra-red cameras, radar and a still camera for detailed views of objects of interest.

#2 Norway, from 2018, has been using drones which measure the sulphur content in the exhaust emissions from several ships in the area.

#3 China launched a network of drones to monitor strategic parts of Chinese maritime claims in the South China Sea, which are responsible of monitoring uninhabited, hard-to-reach islands and will boost China’s dynamic surveillance of the South China Sea.

#4 Port of Amsterdam has put on trial both aerial and marine drones for different operations, yet highlighting the importance technology in the industry, adding that  the M.A.D.S (Marine Anti Drone Systems) will support the Port by monitoring legal and illegal flying across its land, by detecting and identifying drones within a 5km range, providing GPS positioning of both drone and pilot together with the drone’s speed and heading.

#5 The Port of Hamburg is currently testing the use of Autonomous Surface Vehicles (ASV), which can offer a number of advantages for hydrography.