It is said that if driverless HGVs were to replace much of the UK’s conventional lorry and container transport within a generation, they would transform the way the RORO market works in Great Britain.

According to a white paper published by the British Ports Association together with the specialist freight transport consultancy MDS Transmodal, changes anticipated include significant growth in the market share of ‘driverless accompanied’ RORO traffic, especially through North Sea and Western English Channel ports.

Namely, the BPA informs that technical developments as well as commercial and environmental pressures are expected to encourage freight operators to look at new and innovative ways to ship the relatively high-value trade that will be transported in trailers through the British ports of the future.

The study further examines how freight traffic between the British Isles and the Continent could change in the longer term after Brexit.

The study maps how a large proportion of the UK’s maritime traffic will fare in 2050 under an ‘autonomy and carbon reduction’ scenario in which autonomous and ultra-low emission HGVs have been widely deployed; this will have impacts on UK ports and shipping but also UK roads and other national infrastructure such as rail links.

Remarkably, in attempts of a more sustainable environment, the port of Rotterdam Authority along with Transport en Logistiek Nederland (TLN) have begun an exploratory study to get a better insight into turning the container transport by road more sustainable in the port area.

Phoebe Warneford-Thomson, Policy and Economic Analyst, at the British Ports Association commented that

There are undoubtedly significant challenges ahead for the RORO sector and the wider ports industry, such as the transformation to net-zero carbon emissions and moves towards automation.

Adding that “by forecasting the future trends in the RORO sector and ensuring ports can cater for the potential growth in the ‘driverless accompanied’ type of traffic, they can anticipate these changes and be ready to maximize economic advantage.”

Chris Rowland, Managing Director, at MDS Transmodal stated that “technical, regulatory and economic barriers remain with regards to the deployment of autonomous HGVs on the British highways network by 2050. However, given the policy imperative of reducing emissions and the market-based need to increase the efficiency of road freight transport, particularly given rising HGV driver costs, we anticipate a significant industry-wide effort to overcome these barriers. This would, in turn, have implications on other markets,” further stressing that

Our modelling of a scenario for autonomous and electric vehicles in 2050 suggests that potential developments include a substantial shift of traffic towards ‘driverless accompanied’ RORO traffic through ports located on the North Sea and the Western English Channel and this would have implications for RORO port operations and the amount of land required.

The report comes to the conclusion that despite hurdles to be overcome before autonomous and ultra-low emission HGVs are operating on British highways, there is likely to be a significant future focus on overcoming these obstacles as operators seek to reduce costs and remain competitive. Furthermore, it would lead to Britain’s short sea transport chains becoming both more efficient economically and more sustainable.

‘The Impact of Autonomous and Ultra-Low Emission HGVs on the British RORO Port Market’ White Paper, released as part of the BPA’s Port Futures Programme examining emerging trends in the maritime industries and explores the opportunities and challenges to British ports that may present themselves over the next 50 years, can be accessed by clicking on the PDF bellow. 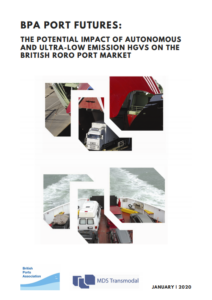