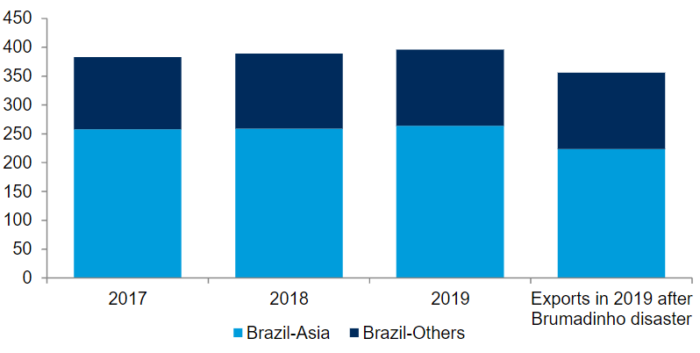 Drewry: More than 40 capesizes to be unemployed in 2019

Drewry reported that due to the latest disaster at the Brazilian mine, Córrego de Feijão, it is possible that the Capesize demand will be decreased by approximately 35-40 vessels in 2019.

Specifically, the  breach of the upstream Dam I of the Brumadinho-based mine took place on January 25, 2019, releasing a tsunami of toxic mud that swept across the area damaging buildings and trapping hundreds of people.

Up to now, Vale, the operator of the mine, noted that there have been 99 fatalities as a result to the dam collapse, 67 of which have been identified, while 259 remain missing. A total of 393 people have been found, and 192 rescued.

In addition, Drewry supports that the Brazilian Government doesn't permit Vale to compensate its loss by increasing production at its other mines.

Rahul Sharan, Drewry’s lead analyst for dry bulk shipping added that it the government allows Vale to compensate to other mines, it will only add to public resentment against both the company as well as the Brazilian government.

This is because it is the second accident in the last four years.

After another accident on November 2015, Vale has decided to decommission all of the remaining 10 upstream dams. As of today, 40 million tonnes of iron ore production associated with the dams will be decommissioned.

To this result, Sharan expects that the loss of 40 million tonnes of iron ore on the Brazil-China route will leave an equivalent of 55-60 Capesizes unemployed, but will provide employment for some 20 Capesizes on the Australia-China route.

In a timeframe of one year, one Capesize vessel transfers two million tonnes of iron ore from Hedland to Qingdao, while the same vessel ships just 0.7 million tonnes in a year from Itaqui to Qingdao.

Replacing the 40 million tonnes will be difficult for any exporter, as India, South Africa and Canada, other than Australia.

As these three major exporters of iron ore are unlikely to be able to compensate for Vale’s loss of production, Australia will most probably gain from Vale’s loss of exports. However, due to voyage distances a sharp decline in Capesize tonne miles is on the cards.