DNV GL: Full application of 3D printing in maritime may take 3 to 5 years 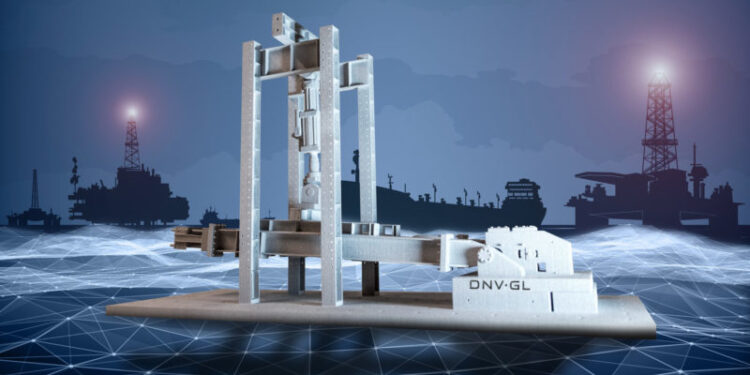 Above image is used for illustration purposes only / Credit: DNV GL

DNV GL sees great opportunity and growth on the adoption of Additive Manufacturing technology in the maritime and oil and gas industries, noted Dr. Ing. Sastry Yagnanna Kandukuri, Global Additive Manufacturing Lead and Principal Subject Matter Expert at DNV GL, adding however that it will likely take 3 to 5 years before the full-scale application of 3D printing.

Speaking at Fabbaloo, Dr. Ing. Kandukuri said that the Classification Society expects Additive Manufacturing to be considered as a choice for the production of structurally complex spare/replacement parts, starting with non-critical applications and then adding other applications as the industry gain confidence.

However, the full-scale deployment of 3D printed parts for safety-critical applications requires development of optimized processes, recognized technical standards and dedicated facilities which are very capital intensive, so it will take up to 5 years until we reach at that point, he added.

DNV GL has been involved in the potential of 3D printing / additive manufacturing (AM) for almost a decade, as it has seen it as a potential game-changer for the industry, on the field of new designs  for more efficient components. This could equate to less lead time, less cost, less logistics, and less need to keep stocks of spare parts, Dr. Kandukuri explained.

In line with these, DNV GL announced earlier in 2018 the establishment of a Global Additive Manufacturing Centre of Excellence in Singapore, expected to serve as an incubator and testbed for research and development of additive manufacturing technology for the oil and gas, offshore and marine (O&M) sector.

Additionally, in late 2017, DNV GL became the first to publish guidelines for the use of AM in the maritime and oil & gas industries. The guideline aims to help manufacturers and sub-suppliers of materials, parts and components, service suppliers and end users adopting AM technologies.

In September this year, DNV GL also announced release of the first approval of manufacturer (AoM) scheme for additive manufacturing (AM) producers.