Design of system capable of removing plastic from the ocean

The culmination of the 2019 Design Challenge of RINA and the Institute of Marine, Engineering, Science & Technology (IMarEST), held by the Western Joint Branch took place on Monday, December 2.

The challenge is a biennial competition for those in the earlier stages of their careers aimed at developing their problem solving; teamwork and management skills outside of their usual environment. More specifically, the subject for this year was to design a system capable of removing items of macro plastic from the oceans.

According to an IMarEST statement, teams made up of 2 to 6 members- including both students in further education as well as those in employment who were required to produce their solution between mid-September and early December.

The challenge was judged based on the production of a poster along with a 10-minute presentation and 5 minutes of questioning from a select panel of judges. The judges covered a range of appropriate areas with representatives from the National Oceanographic Centre, the Environment Agency, Houlder, Babcock and the IMarEST.

The designs provided a wide range of concepts; static and propelled, such as single point collection and multiple autonomous drones; system-based recycling and shore-based recycling among others.

IMarEST reported the high standard of material and presentations across all the teams; noting that the top 3 positions were separated by 4 points out of a maximum of 500.

The winning team was from the University of Southampton with their design Oceanum Nova; a repurposed catamaran dive support vessel collecting debris caught by floating barricades; the concept covered the design brief in impressive detail while also showing how it could be used in multiple different scenarios and locations. 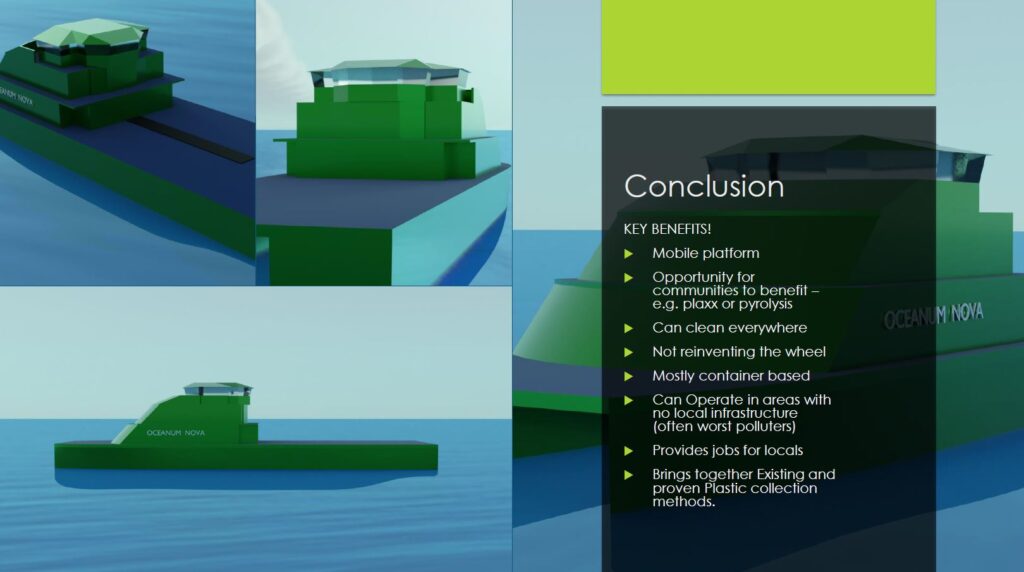 What is more, the University of the Aegean started a series of tracking and quantifying plastic garbage in the sea in 2018, called 'Plastic Litter Project (PLP)'. The program aims to remotely locate, large quantities of plastics in the sea, aiming to remove them more efficiently.