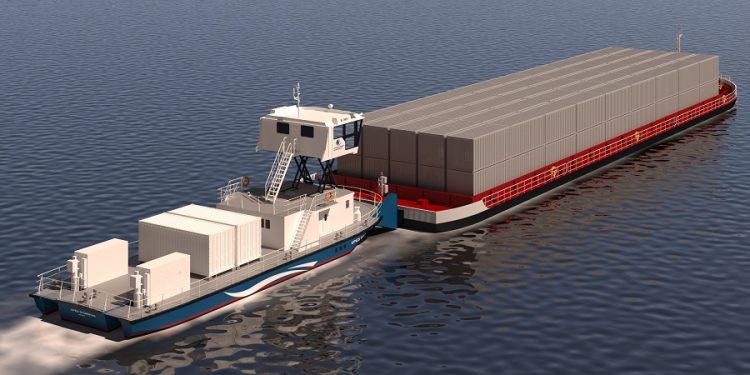 Western Baltic Engineering (WBE) is unveiling new designs for what it claims to be the first ever electric pusher vessel for use on Europe’s inland waterways called the ‘Electric Eel’.

WBE said the first electric pusher is due to be built next year for the Lithuanian Inland Waterways Authority, a public body operating under Lithuanian Government Ministry of Transport and Communications.

The Electric Eel has huge potential to help cut carbon emissions on inland waterways across Europe and worldwide. The authority has big plans to ramp up use of the 450km stretch of waterway between Klaipeda on the Baltic Sea to Kaunas to switch cargo from the road network in line with EU policy.

She further added that the pusher design is pending class Approval in Principle with Bureau Veritas and can operate at a range of 300km before needing to stop.

The 26m long vessel is powered by three DNV approved batteries with a combined weight of 74 tonnes, two held in TEU containers on deck which can be replaced via crane at harbour, and one permanent battery below deck which can be charged at quayside.

The vessel has a pushing capacity of 2000 tonnes and a top speed of 22Km/h downstream at 85% engine load. The electric batteries create an engine power of 500 HP/400 KW compared to a diesel equivalent which has 1000 HP/800 KW.

Through trial and error using rigorous computerised fluid dynamic (CFD) testing we have produced the smoothest possible hull resistance. We’re also using thin lighter steel, approved by class, to reduce weight while at the same time keeping safety of paramount importance. In addition, we have innovated the wheelhouse, using a jack up design made of aluminium, again to spread and reduce weight