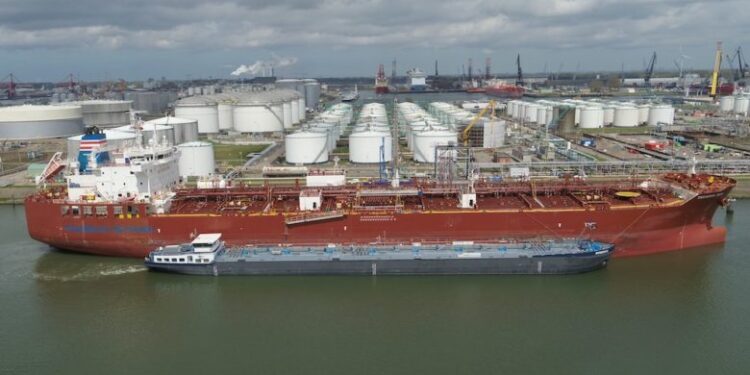 Waterfront Shipping demonstrated the ease of ‘barge-to-ship’ bunkering as part of the launch of the world’s first barge-to-ship methanol bunkering operation at the Port of Rotterdam.

More specifically, Waterfront Shipping’s Takaroa Sun participated in the operation as the inaugural methanol-powered ship to be fuelled by a commercial bunker barge.

The premiere bunkering operation took place at the Vopak Terminal Botlek of Royal Vopak with a bunker barge, “MTS Evidence,” operated by TankMatch.

When appropriate safety measures are followed, we know that methanol is safe to ship, store, handle and bunker using procedures similar to conventional fuels. Today’s methanol bunkering demonstration is another step in helping the shipping industry with its journey to reduce emissions

23 shipping players to explore ammonia as an alternative marine fuel

According to Waterfront Shipping, ”the bunkering demonstration provided further evidence of methanol as a low emission, safe and simple to handle clean fuel that offers a future-proof pathway to a low-carbon future.”

The Port of Rotterdam fully supports initiatives to reduce pollution and greenhouse gas emissions and promotes sustainability for ships calling here and in other ports. Methanol has proven itself able to meet our very stringent safety standards and can play an important role in meeting the lower emission goals

What is more, Andre Nieman, Chief Executive Officer of TankMatch noted that more and more operators want to understand their options for lowering their emissions and want a simple path to IMO compliance. Taking this into consideration, bunkering with methanol requires a similar level of risk assessment and safety management as other conventional bunker fuels and we found this process simple to manage and execute.

Finally, Waterfront Shipping recently ordered an additional eight methanol-fuelled vessels to be delivered between 2021 and 2023. This means thast approximately 60% of its 30-ship fleet will be powered by lower emission, methanol dual-fuel technology.