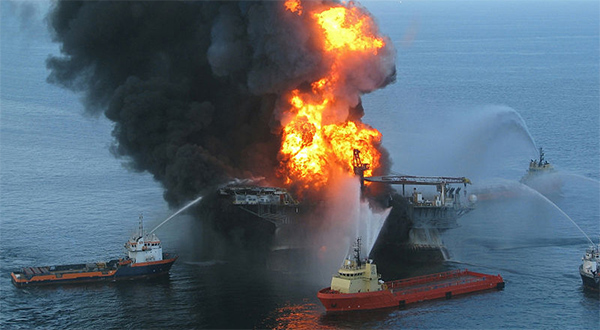 Deepwater Horizon caused the largest oil spill in US waters

The US National Institutes of Health issued a report, revealing an association between clean workers' adverse acute health effects and exposure to dispersants, that were used in response of the Deepwater Horizon explosion, in the Gulf of Mexico.

Deepwater Horizon is the worst oil spill in US history. Over 4.9 million barrels of crude oil had been released into the Gulf of Mexico for 87 days between the explosion of the rig on 20 April 2010 and the top-capping of the wellhead on 15 July 2010, according to US Coast Guard.

Specifically, the report, published in the journal Environmental Health Perspectives, spelled out in clinical language that Deepwater Horizon cleanup workers exposed to Corexit dispersant, during the nearly three months oil spilled into the sea, were more likely to experience coughs, wheezing, chest tightness and eye, nose, throat and lung irritation than those who weren’t.

Dispersants are typically used to reduce the interfacial tension between crude oil and water and facilitate the breakup of oil slicks into small droplets that are thought to be more easily dispersed by natural processes such as wind and wave action. Two dispersants were used in the Deepwater Horizon spill response: Corexit™ EC9500A (9500A) and Corexit™ EC9527A (9527A).

Outcomes were based on participant responses to questions on the enrollment interview about the frequency of symptoms at the time of the OSRC or at the time of the enrollment interview. Five distinct respiratory symptoms (cough, wheeze, tightness in chest, shortness of breath, burning in nose/throat/lungs), one dermal symptom (≥2 d of eczema, dermatitis, other skin rashes, sores, or blisters), and two eye irritation symptoms (itchy eyes, burning eyes) were assessed.

As Bellona suggests, these conclusions came as no surprise. The Government Accountability Project, a watchdog group, have documented reams of symptoms in interviews with cleanup workers that persisted as long as three years after the disaster. In 2015, the University of Alabama at Birmingham also proved Corexit could damage human lungs and the gills of fish and other marine life.

However, the report represents the first extensive study on the impact of oil dispersants on human health.