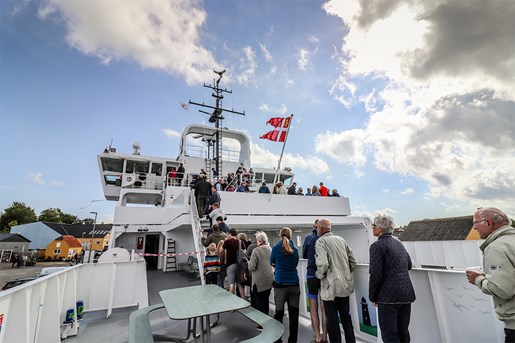 The electric ferry Ellen, serving the regional route between Søby and Fynshav in Denmark as part of an EU-funded project, has successfully marked one year of operations on 1st June.

Compared to a similar modern diesel-powered ferry, Ellen annually saves around 2,520 tons of CO2, 14.3 tons of NOX, 1.5 tons of SO2, 1.8 tons of CO and half a ton of particulate matter, manufacturer Danfoss Editron said.

The E-ferry is charged from the local grid on the island of Ærø, whose electricity demand is entirely powered by wind. Even if Ellen was to use electricity from the usual Danish grid mix, it would still save around 2010 tons of CO2 annually.

Calculations showed that the operator could save between 24 and 36% in operating costs compared to operating a diesel or diesel-electric ferry for the remainder of the ferry’s estimated 30-year lifetime.

The story of Ellen begins back in 2013, when naval professionals on the Danish island of Ærø decided to replace an ageing diesel ferry operating on the regional route with a fully-electric one.

In 2015, the EU’s Horizon 2020 research and innovation program agreed to support the project, which became known as the Horizon 2020 E-ferry Project.

The fully-electric ferry had to be able to cover distances of up to 22 nautical miles in the Danish part of the Baltic Sea that were, at the time, only operated by conventional diesel-powered vessels.