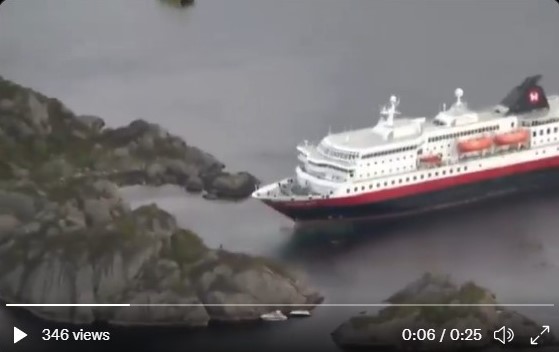 Hurtigruten’s coastal cruise ship the Richard With ran aground at the entrance to the Sognefjord on August 5. The cruise ship was traveling without passengers.

Hurtigruten quickly stated that the crew suffered no injuries and the vessel was in no immediate danger. The Richard With ultimately floated free on the next high tide.

The Norwegian Coast Guard and local police received reports that the vessel had grounded, and dispatched helicopters and boats to the scene to determine the extent of the incident. Hurtigruten also ordered two tugs to assist the vessel.

The cause was a technical system error, which led to the ship temporarily losing control

the company said in a written statement, also reporting that there were 53 crewmembers aboard the Richard With and in addition 14 service personnel that were doing follow-up work after the shipyard stay.

There are no leaks or environmental damage but that the vessel had sustained damage that they were investigating.

#repost @salvage_and_wreck#breakingnews The Hurtigruten ship RICHARD WITH ran aground in the Sognefjord on Friday 5 August 2022.

According to a statement from Hurtigruten there are only 53 crew on board, in addition to 14 service personnel who did follow-up work pic.twitter.com/ZoGukBR6hH