On August 21st, NABU presented its cruise ship ranking 2019. The findings of this year’s evaluation demonstrate that only a small proportion of fleets is becoming cleaner, while the industry by large continues to depend on heavy fuels and fails to employ exhaust technology.

This year NABU covered technologies in the field of energy supply and propulsion systems for the first time listed as a separate category. Two sailing ships alone as well as those ships with a shore power connection, using electricity from renewables while in port, are scoring better.

According to NABU, heavy fuel operated diesel engines still dominate the scene. Recently more and more cruise ships started to include LNG engines, but LNG is still entirely a fossil fuel and its extraction process is in part heavily damaging to the environment.

In addition, the industry must take into consideration the so-called methane slip, by which the highly potent greenhouse gas methane is emitted into the atmosphere.

While gas powered engines hence do emit less air pollutants in comparison to marine diesel and heavy fuels, they are not performing better in terms of the fleet’s climate footprint

In the category of air pollutants German ship owner AIDA comes first with its newest model AIDAnova. AIDA’s Italian parent group Costa Crociere is on a par with its LNG operated “Costa Smeralda”.

The third place is awarded to three ships of shipping company Hapag-Lloyd: “Europa 2”, winner of the year 2013, as well as the new expedition cruise ships “Hanseatic Nature”, and “Hanseatic Inspiration”.

Far behind the industry’s giants MSC and Royal Carribean take the last place. German company TUI Cruises has downgraded to a 13th place.

Regarding emission reduction technology, NABU says that particle filters and nitrogen oxide catalysts are still rarely used. However, French supplier Ponant is the first company having announced to voluntarily phase out heavy fuel oil setting the course for a timely exhaust gas treatment.

In the meantime, NABU demanded that all companies replace heavy fuel oil with a comprehensive use of exhaust technology for all ships.

Climate footprint of cruise ships is especially worrying: All ships are fuelled by fossil fuels producing enormous greenhouse gas emissions. Two sailing ships alone are scoring better, but they do not represent a commonplace type of ship

Commenting on the situation, NABU CEO Leif Miller, said that 'the cruise ship industry’s failure to embrace climate protection is a slap in the face of our youth.'

In addition, Daniel Rieger, head of transport policy, explained that tax exemptions for marine fuels are fatal in the view of today’s climate crisis and urgently need to be ended. He noted that as long as the use of fossil fuels is massively subsidized and emission and energy efficiency standards of ships remain derisory, a switch to zero-emission engines will not take effect.

A comprehensive reduction of air pollutants is technologically possible and also economically feasible for a mere fraction of the construction costs of a new ship. It’s a scandal that we still see ships today which are built with a standard that dates back to decades ago

He also added that technologies for new constructions as well as retrofitting are widely available. For this reason, it is crucial to make these new standards mandatory and install them in all ships as soon as possible.

He concluded by saying that mandatory shore power connections are long overdue for all European ports.

In order to do so, cruise ship companies need to make a genuine commitment, but apart from this ports like Hamburg need to employ shore power plants more widely i.e. not only in Altona but at the harbor city and Steinwerder terminals, too 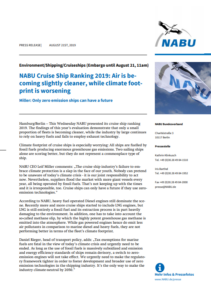