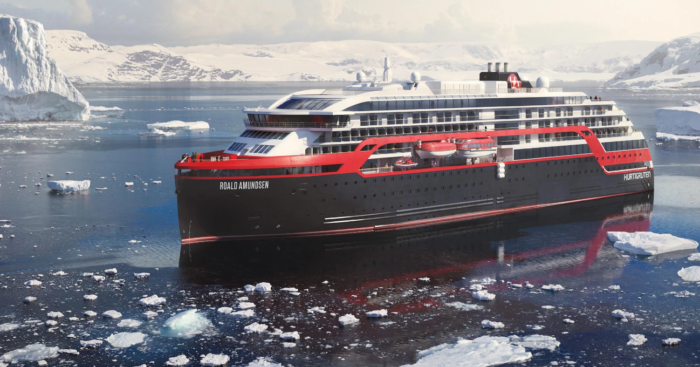 Above image is used for illustration purposes only/ Credit: Hurtigruten

Many passengers on a recent cruise of the expedition cruise ship Roald Amundsen lost their luggage when the truck ferrying it from the airport to the ship was hijacked in Santiago, Chile, leading to a brief delay in the ship’s departure.

Namely, the Roald Amundsen, the world’s first hybrid powered cruise ship, was preparing for a voyage to Antarctica in Punta Arenas, when the 200 bags and suitcases were stolen after a contractor-operated truck ferrying the passenger luggage was hijacked in Santiago, Chile.

The voyage was then briefly delayed due to the incident, and 15 passengers opted to cancel their participation. On Friday, November 29, the cruise ship got under way.

It is reported that no Hurtigruten staff or passengers were involved in the incident, and even though the truck was operated by a local firm, Hurtigruten offered the affected guests up to $2,000 in reimbursement for clothing required for the voyage, as well as facilitate guests’ contacts with their travel insurers among other.

It just in August when Hurtigruten christened MS Roald Amundsen, the world’s first hybrid electric-powered expedition cruise ship this fall in Antarctica, becoming the first ship ever to be christened in Antarctica.