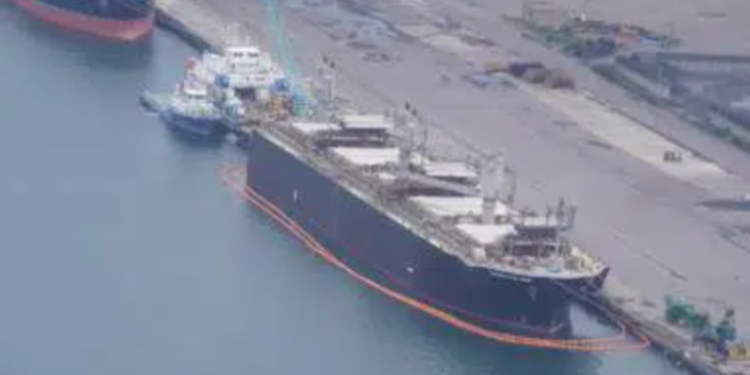 Following the Crimson Polaris grounding that occurred off the coast of Hachinohe on August 11, the bow part of the fragmented hull was towed into Hachinohe Port.

As informed, due to the weather and sea conditions, the work to remove the oil from the bow of the vessel at sea was expected to take a long time, and in order to make the work smoother and safer, the shipowner and ship-management company towed and moored the vessel in Hachinohe Port with the understanding and cooperation of the local government, related organizations, fishermen, and other concerned parties.

As for the stern section, the Japan Coast Guard and related parties are continuing their investigation.

To remind, the 39,910-tonne Panamanian-flagged vessel “Crimson Polaris” was carrying wood chips from Thailand when it ran aground and split in two off Hachinohe harbour, in the morning of 11 August. Although there were no injuries among the 21 crew, the incident caused an oil spill that reached the Japanese coast.

After the incident, NYK also organized a crisis management center led by NYK president Hitoshi Nagasawa to rapidly address the situation. Company personnel have been sent to the site, and necessary support will be provided to the shipowner and ship-management company.

NYK will continue to make every effort to resolve the situation as soon as possible in cooperation with the shipowner, ship management company and other related parties.