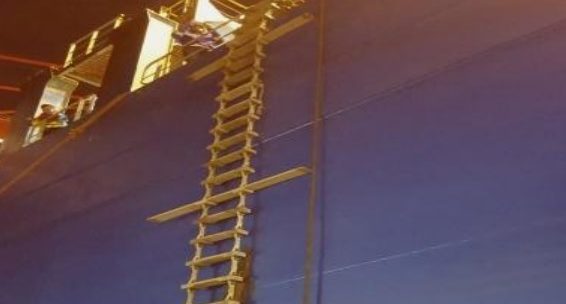 A tragic incident occurred early in the morning of 4th May in Algeciras waters, Spain, during crew change operation.

Namely, Salvamento Marítimo has reported the death of a man this morning, Tuesday 4, who fell into the water from an oil tanker docked in the Bay of Algeciras.

The incident occurred at around 2am in the morning as the crew of the Maltese-flagged tanker “Bordeira” was changing shift outside the anchorage in Algeciras port, and one of the three going ashore fell into the sea and got tangled in the ladder in the water.

A statement from Algeciras control centre reported that they received a call from the service vessel “Picasso I”, saying that a man had fallen into the water from the oil tanker “Bordeira”, with the “Salvamar Denébola” and the auxiliary “Luz de Mar” both being mobilised to the scene.

The pilot of Getares from the port of Algeciras was also deployed and was the vessel that finally rescued the man, with one of its crew jumping into the water to release the man, who was still conscious, but with signs of hypothermia, from the ladder, taking him to the Saladillo dock, from where he was transferred to the Punta Europa hospital in Algeciras, where he sadly died.

In light of the situation, an investigation has been initiated by the relevant authorities into the circumstances surrounding the man’s death, while the tanker is kept in Algeciras for an inspection.

Overall, climbing a ladder can be fatal, as a recent survey by IMPA revealed that 12.11% of pilot transfer arrangements were reported to be noncompliant with combination ladders and pilot ladders having the most defects by both number and percentage.