Crew of bulker on fire could be evacuated 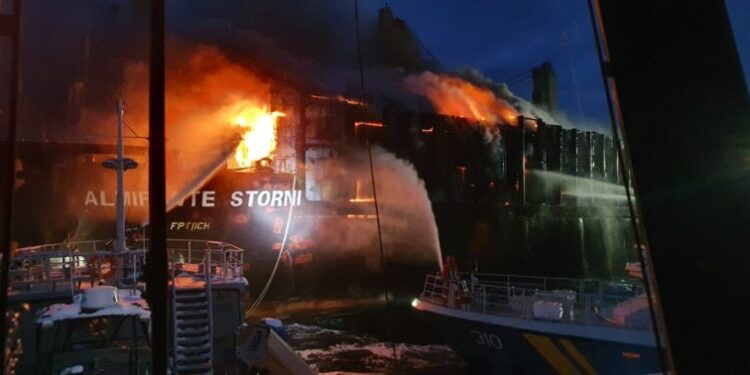 The Swedish Coast Guard warned that 17 crew members on the fire-stricken German bulker Almirante Storni may have to be evacuated.

The fire broke out among timber on the foredeck of the vessel, on 4 December off Gothenburg. Ever sicne, the Coast Guard is trying to control and extinguish the fire.

Currently, the situation is described as stable, but extra extinguishing resources have been deployed to tackle the blaze.

However, Coast Guard rescue leader Fredrik Hallerstrom, stated that as the fire has not yet been extinguished, a rescue might take place. For this happen, “extensive cooperation is required, on several levels.”

Furthermore, with the situation being under control, the vessel shall arrive inside the Port of Gothenburg by its own engine power and escorted by tugs.

A preliminary probe has also begun, while an initial questioning of the crew by the Coast Guard has taken place on board.

NSC Holding has contact the master, but the cause of the incident was not clear.