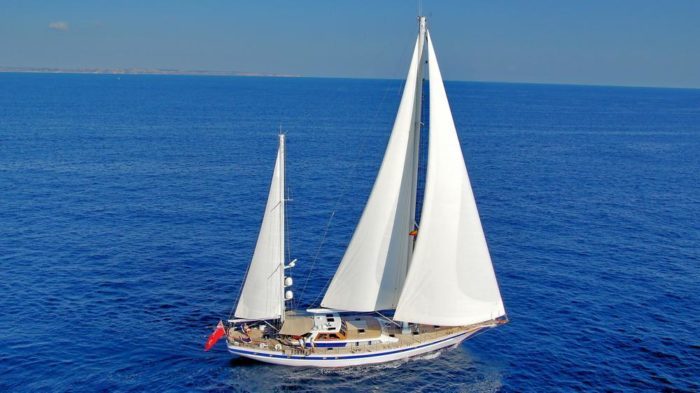 Crew abandon yacht after it collides with whale

In its latest Safety Digest, UK MAIB describes an incident where a yacht collided with a whale. Initially the crew did not notice any damages on the ship, while a slight ingress of water was being managed by the bilge pumps. However, as the time was passing more problems were beginning to arise, leading the crew to abandon the boat.

A yachtsman, with two crewmen, was skippering his yacht on an ocean passage back home. The boat had been underway for several days and the voyage was going well.

During the morning, the skipper was on watch and both crewmen were below. The weather was fine and the boat was running downwind at about 6kts; conditions were perfect and there was nothing in sight. The skipper went below and, when he arrived at the chart table, he felt an unusual rumbling for a few moments, followed by a violent shudder. The skipper was thrown across the saloon area, landing in soft furnishings without being injured. The skipper went back to the cockpit, where he saw the tail fluke of a large whale astern of the yacht.

The crew realized that the ship had collided with a whale, and then thoroughly searched for damage; the bilges were dry and nothing unusual was found. Nevertheless, given the violence of the impact, the skipper decided that the bilges should be inspected every 2 hours. The boat continued its passage, sailing downwind without significant stresses on the rig and only rolling gently in the ocean swell.

Over the following 17 hours, the crew observed hairline cracks gradually showing around the visible keel bolts; slight weeping of water steadily increased to slow flooding. However, the rate of water ingress was well within the capacity of the boat’s bilge pumps.

When the water ingress started, the skipper sent a message to his wife to raise the alarm with the UK Coastguard, but did not to set off the EPIRB as the flooding was under control. The UK Coastguard then communicated with the nearest coastal state, and a military maritime patrol aircraft was deployed to the area to find the boat and contact the crew. A merchant vessel that was near the area at that was also alerted and changed course to head towards the yacht.

During the night, the skipper started hearing a clunking sound each time the boat rolled and assessed it to be movement of the keel. This development led to the decision to abandon the boat. When the merchant vessel arrived on scene, the skipper drove the yacht alongside and the crew transferred to the safety of the ship. The yacht was then cut free, with a hull valve left open in order to flood and sink.