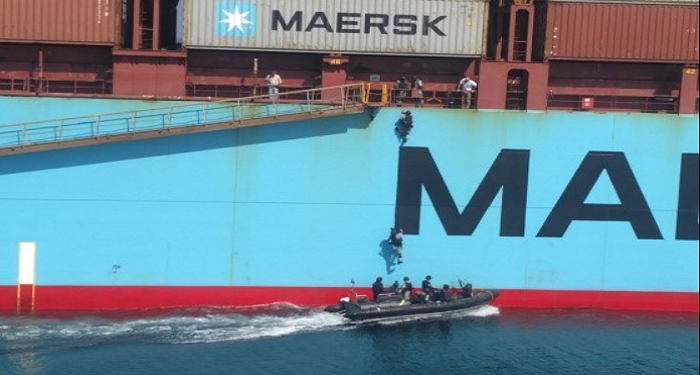 Combined Task Force 151 (CTF 151) carried out the Operation Haka on behalf of Combined Maritime Forces (CMF). This was a counter piracy operation in the Gulf of Aden, aiming to counter piracy and ensure greater maritime security in the region.

The counter piracy operation was conducted in the Gulf of Aden (GOA) and the Socotra Gap, by CTF 151.

This was completed as part of the Kuwait Navy-led CTF 151’s enduring mission to counter piracy, and to contribute to wider maritime security in the region.

Operation Haka started 16 of November and ended on 23 November 2018.

It was conducted with the dedication and assistance of adjacent forces within CMF, the European Naval Force (EU NAVFOR) CTF465, Independent Deployers and regional stakeholders.

Units consisted of five ships, six aircraft, and observers from an additional five Maritime organisations. Operation HAKA aimed to strengthen effective security and regional partnerships across the Gulf of Aden and Socotra Gap through a number of operational activities and training opportunities enhancing maritime security through air and surface surveillance.

I am very impressed by the professionalism and efficiency demonstrated by all participating units in Focused Operation Haka. The participation from CMF units alongside independent deployers, and commercial vessels shows the determination of the combined contribution to support counter piracy efforts.

An outstanding part the operation was a boarding exercise conducted between INS Sunayna and the cargo vessel Maersk Seletar. This was a rare training opportunity to work together to enhance cooperation and coordination between regional contributors. It, also, gave the Indian Navy sailors an opportunity to practice boarding a container ship and exercise their counter-piracy techniques.

One of the key objectives of the operation is growing regional counter piracy capacity through engagement, cooperation, and coordination of regional military forces. Working together on counter-piracy operations helps to strengthen understanding, interoperability and mission success.