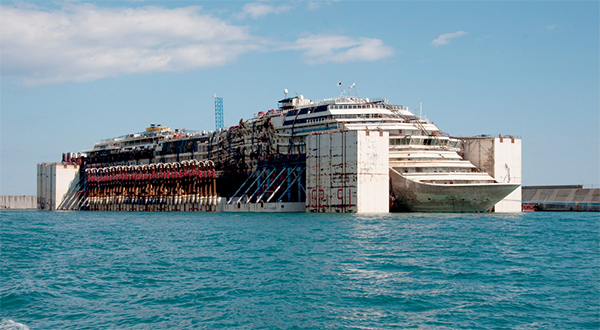 On Friday, 12th of  May, the Italian highest court upheld the sentence of the former Costa Concordia captain to 16 years in prison. Francesco Schettino has been convicted of manslaughter and causing the shipwreck. He has been also convicted of abandoning the capsizing vessel with passengers and crew still aboard. The Italian cruise ship  capsized and sank after striking an underwater rock off Isola del Giglio,on January 2012, with the loss of 32 lives.

Francesco Schettino was originally found guilty in 2015 of manslaughter, provoking a maritime incident and abandoning the ship and passengers. The end of the appeals process was marked on Friday, with the court upholding the relevant verdict. According to his laywer, Francesco Schettino had handed himself in to the Rebibbia prison, in Rome, after the verdict.

The incident happened on a January night, when the Costa Concordia, carrying more than 4,200 passengers and crew, hit rocks off Giglio and started capsizing. The captain was reported abandoning the stricken ship during rescue operations, before all passengers and crew were clear. He was also accused for delaying the evacuation process.

Captain Schettino said he had been thrown off the vessel, as it tilted and had landed on the roof a lifeboat. In addition, he admitted some responsibility but he denied that was the one to blame for the deaths. He also invoked communication problems with the Indonesian helmsman.

Earlier, five crew were also sentenced up to three years in jail.

The Costa Concordia wreck recovery was the most expensive one in history. The ship was left abandoned on its side for two-and-a-half years before it was salvaged. The last body was not recovered until 2014.