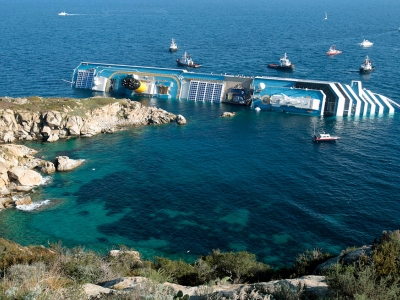 The Italian Ministry of Infrastructure and Transport (MIT) released the long awaited English translation of its report on the safety technical investigation into the marine casualty on January 13, 2012 involving the cruise ship Costa Concordia.

The ship capsized as a result of large-scale internal flooding from a 53-meter long breach of its hull involving five watertight compartments. The breach occurred when the ship allided at a speed of 16 knots with the Scole Rocks off Giglio Island in the Tyrrhenian Sea at 21 45 07 local time.

The main cause of the casualty is attributed to “the Master’s unconventional behavior”. The incident resulted in the death of 32 persons and the injury of 157 others, as well as the loss of the ship and significant environmental damage.

Initial findings of the report include the following:

Actions to be taken as reported include the following :

Finally the report indicates that there are the following findings affecting international regulations :

1. Double-skin for protecting the WTCs containing equipment vital for the propulsion and electrical production;

2. Limiting of the down flooding points on the bulkhead deck;

3. Provision of a computerized stability support for the master in case of flooding;

4. Interface between the flooding detection and monitoring system and the on board stability computer;

6. More detailed criteria for the distribution, along the length of the ship, of bilge pumps and requirement for the availability of at least one pump having the capacity to drain huge quantities of water;

7. Relocation of the main switchboard rooms above the bulkhead;

8. Relocation of the UHF radio switchboard above the bulkhead deck;

10. Provision of a second emergency diesel generator located in another main vertical zone in respect to the first emergency generator and above the most continuous deck;

11. Provision of an emergency light (both by UPS and emergency generator) in all cabins in order to directly highlight the life jacket location;

12. Bridge management, considering aspects such as the definition of a more flexible use of the resources;

13. Bridge Team Management course for certifications renewal should be mandatory by the 1st January 2015;

14. Principles of Minimum Safe Manning (resolution A.1047(27) as amended by resolution A.955(23)) that should be updated to better suit to large passenger ships;

16. Inclusion of the inclinometer measurements in the VDR;

17. SAR patrol boat supplied with fix fenders, blocked in the upper side of the hull, to approach safe other ships/boats in case of extraordinary evacuation of persons. This should be able to load at list 100 passengers in their deck;

18. Divers speleologist, able to rescue, even in dark condition, persons standing into the ravines of ships/wrecks.

Source: The Italian Ministry of Infrastructure and Transport