COSCO Shipping Ports announced that the equity transaction of the project company responsible for its greenfield subsidiary at the Port of Chancay, Peru, is complete. The ceremony to highlight the transfer, attended President of Peru Martín Vizcarra and a number of high-ranking officials from the government, as well as Chairman of COSCO Shipping Corporation, Captain Xu Lirong.

Generally, in January 2019, COSCO proceeded to a signing a subscription and investment agreement with Volcan to acquire a 60% stake in the facility, which is located 58 kilometres north of the Peru’s capital and economic centre Lima.

When the port is constructed in the Chancay area, it will include a number of multi-purpose terminals, including container handling facilities and other related infrastructure.

According to an announcement via Twitter, phase one of the project will include the building of fourth berths, two of which are container berths with an annual throughput capacity of 1 million TEU. 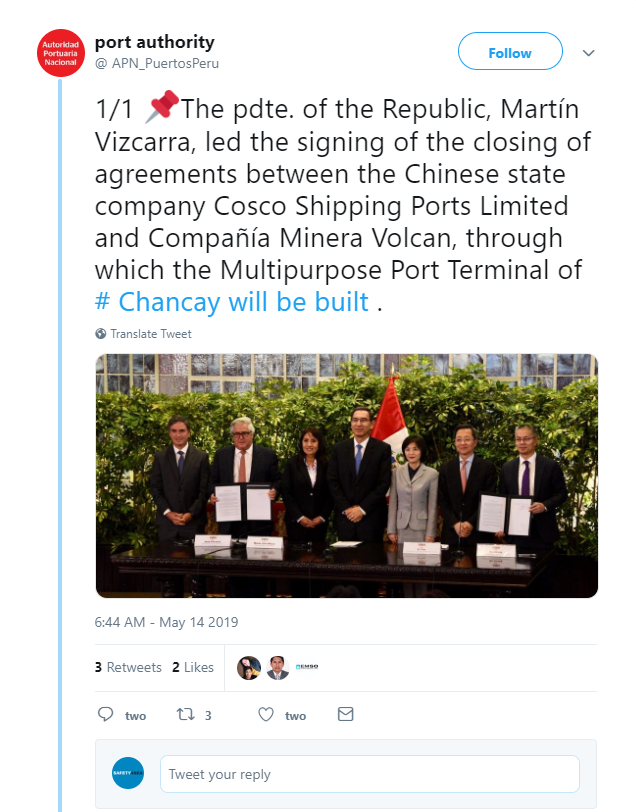 The event culminated in the signing of closing certificates by Zhang Wei, Chairman and Managing Director of COSCO SHIPPING Ports and Mr. José Picasso, Chairman of Volcan Compañía Minera S.A.A, finalizing the deal.

The signing of the closing certificate by companies from Peru and China is a milestone. The companies from China and Peru jointly invested and developed the Chancay Project, which laid a solid foundation for Peruvian economic development, as well as trade cooperation between China and Peru.