Hill Dickinson law firm an Associate Member of the British Ports Association (BPA), issued a paper on the coronavirus outbreak and its impact on the UK ports sector.

According to the paper, Port health authorities are responsible for developing health controls at seaports and airports in the UK and they are tasked with preventing the introduction of dangerous epidemic diseases through shipping activity without creating unnecessary disruptions to world trade.

The paper highlights that the possibility of a serious outbreak cannot be overseen.

The UK Government has issued advice identifying mainland China, Thailand, Japan, Republic of Korea, Hong Kong, Taiwan, Singapore, Malaysia and Macau as places of special concern for the virus. These areas have been identified because of the volume of air travel from affected areas and number of reported cases. All are on standard shipping routes.

Moreover, the discovery of a coronavirus case or an outbreak onboard a ship that is berthed at a UK port may lead to the ship being quarantined, something that will impact the industry of the UK as the berth would then be out of action for the duration of the quarantine with the inevitable loss of income from other ships.

Although the shipowner will be responsible for the services being utilised and provided, and/ or the government may provide some support, there is a high possibility of a significant commercial loss at the port depending on the relevant terms agreed between the port and the shipowner, and the nature of any government support.

It will be important for ports to act quickly, liaise closely with the authorities and limit potential areas of loss.

In addition, ports have the option of moving vessels to alternative or lay-by berths where available.

Even with the current incidence of the virus, smaller ports with fewer berths and less working space are likely to be worse affected than those with room for maneuver.

The law firm notes that a port with a quarantined ship or ships alongside is at risk of being designated an unsafe port.

Therefore, under a charter-party, charterers are obliged to nominate a safe port and the shipowners should sail there unless quarantined ship or ships alongside is at risk of being designated an unsafe port.

Moreover, following specific protective measures can increase the crews’ safety and decrease any risk of infection. Measures taken during both the MERS and Ebola outbreaks, meant that numerous ports remained open despite being affected by the outbreak. However, there is likely to be a cost to such precautions.

As above, it would need a significant increase in the scale of the outbreak before large ports are likely to be deemed ‘unsafe’. However, the position might be different where the port is smaller, or the berth being offered is adjacent to one housing a quarantined ship.

It should be reminded that the Wuhan Coronavirus (COVID-19) was firstly reported on December 31 2019, in Wuhan, China from where it spread globally. After WHO declared a global emergency, a number of shipping organizations issued circulars, guidelines and port restrictions to achieve the utmost protection of the seafarers and the shipping industry. 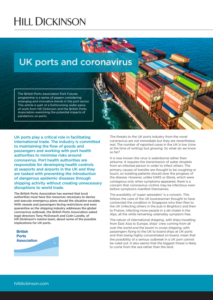