Copenhagen to receive a new green container terminal by 2023 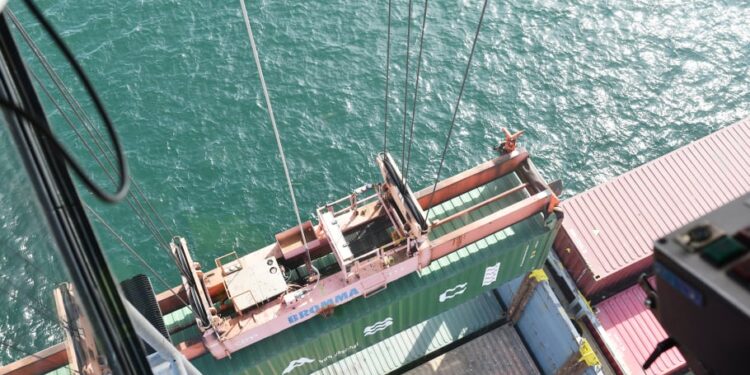 Copenhagen Malmö Port and By & Havn have reached an agreement on a new container terminal at Ydre Nordhavn.

The location of the new container terminal means that goods to the Capital Region of Denmark can continue to be delivered close to the customers, sparing the environment from added emissions and minimising congestion on the Danish road network.

The existing container terminal at Levantkaj in Copenhagen’s Nordhavn remains in full swing, and within the coming years it will be moved to Ydre Nordhavn with new, modern facilities with the possibility of expansion. The expansion will take place in pace with the freight volumes increasing and new logistics enterprises, such as a distribution centre, commencing operations.

Today, Danish ports handle a bit over 75 percent of the imported goods to Denmark, and the Corona pandemic has made it clear how important it is to maintain global supply chains and ensure that goods can continue to be delivered across borders.

Therefore, a well-functioning container terminal close to Copenhagen is vital infrastructure and at the same time, an essential and sustainable supply artery for the Capital Region and the rest of Eastern Denmark. The location will mean less congestion on the roads as well as a greener Denmark.

Anne Skovbro, CEO of By & Havn, is therefore looking forward to the new container terminal, which will be built by By & Havn.

“Copenhagen has always been a city of commerce and trade, and it is vitally important that we can contribute to maintaining the city’s historical and commercial importance. As a vital key point in the distribution chain and with a location close to the end-consumers, at the same time we can make it as sustainable as possible. In addition, with the relocation of the container terminal from Levantkaj to Ydre Nordhavn, we are really addressing the next stages of the sustainable development of Nordhavn, where in the future Levantkaj will be developed as a new residential area for existing and future generations of Copenhageners.”

With a location at the tip of Ydre Nordhavn, the new container terminal will be situated in a new urban district with a well-developed and modern infrastructure, along with dedicated areas for the logistics of the future. Work on the construction of the new Nordhavn tunnel under Svanemølle Bay is well underway, and when the tunnel is completed in 2027, transport to and from the container terminal will have direct access to the motorway network around Copenhagen via the tunnel.

”We are exceptionally pleased that we have come to an agreement on the principles for the current container terminal to be relocated to the newly fulfilled areas in Ydre Nordhavn. This ensures that Copenhagen retains the basis for its important container traffic, and a large workplace remains in the city. More traffic on the blue highways is a cornerstone of the transition to a greener transport sector, and therefore the new full-service container terminal in Copenhagen will benefit the climate – including consolidating the future supply of goods to Greater Copenhagen and the whole of eastern Denmark.”