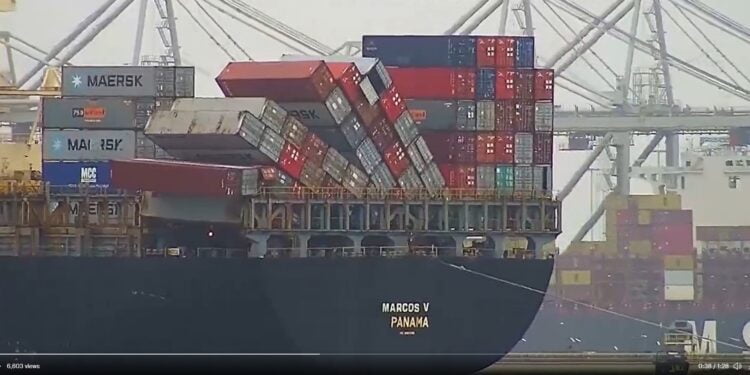 The Panama-registered container ship Marcos V lost the 40-foot containers around the Dutch Wadden islands while en route to Germany in heavy winds, on February 19.

Marcos V reported to the Coast Guard Center on February 19 in the morning that it had lost containers at sea. The ship lost the containers in the sailing route to the south, between the north of Vlieland and the west of Schoorl.

It is currently known that 26 containers have been lost, which contained no cargo.

The Dutch Coast Guard is now working together with the Directorate-General for Public Works and Water Management (Rijkswaterstaat) and the safety region of Fryslân with regard to further handling of this incident.

Rijkswaterstaat holds the ship manager liable for the incident, while the security region has initiated an active search for containers on the Wadden Islands.

The coast guard has also deployed a tug to search for floating containers, and a plane is alerted to search from the air. No containers have been found to date.

At the time of the incident there was a wind force of 9-10bft and the waves were around 8 meters high.

A series of incidents with exceptional container losses occurred during the winter season 2020-2021. As a result, the TopTier project was put in place by the industry to find ways to avoid similar incidents in the future, and initial results show that parametric rolling in following seas was especially hazardous.

When to be alert?