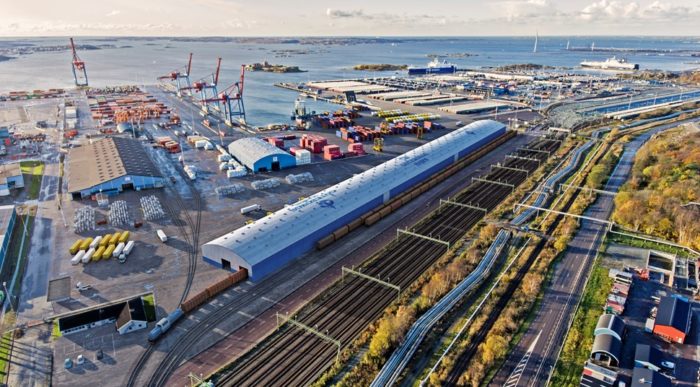 Construction of crossdocking terminal at Port of Gothenburg begins

The Port of Gothenburg announced that construction of the Svea Terminal, a new rail connected crossdocking terminal for forest products, is now under way. The new terminal will be offering weather-protected transloading right beside the port's ro-ro and container terminals. Operations will begin during the first half of 2020.

Currently, surface preparations are ongoing at a forthcoming cross docking terminal at the Port of Gothenburg. Export cargo such as paper and carton board, pulp and sawed timber will be able to travel directly into the terminal for transloading into containers or trailers for further transport by sea to global markets.

In addition, the world’s largest storage tent, featuring 21,600 square metres, will be built on the 45,000 square metre terminal site. This will enable transloading to take place without being exposed to the elements.

In addition, there will be open storage areas and five rail tracks. The track leading into the tent will be a production track and the other four tracks will be used as marshalling tracks for the facility.

Once the new terminal is operational, rail-borne freight volumes at the port could increase even further thanks to the expansion in space and transloading capacity that has been added to keep pace with the market demand. The new marshalling tracks will also reinforce the port’s rail offering as a whole

The Svea Terminal is the latest in a series of rail investments made at the Port of Gothenburg in the last years, in order to increase capacity and reliability. In 2018, Gothenburg Port Authority completed the Arken Combi Terminal, which has significantly enhanced rail capacity at the port.

What is more, the Swedish Transport Administration is now in the process of transforming the Port Line into a double-track system, and APM Terminals has modernised rail operations and increased the capacity at the Container Terminal.

The Svea Terminal is being built on behalf of the Gothenburg Port Authority with Skanska as the contractor. It is planned to open during the first half of 2020.