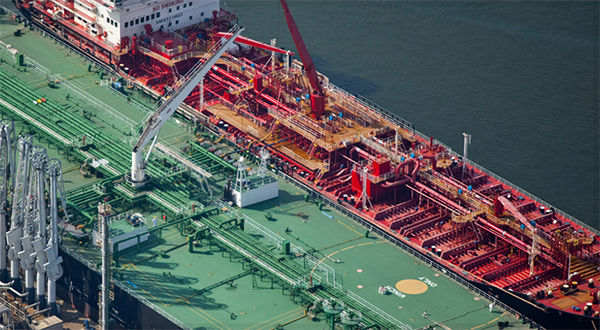 The American Club published 'Bunkering - A Compedium' report, providing details on approaches towards loss prevention initiatives, demanded by both regulations and by supplying guidance on operations and management, ashore and afloat, aimed at obviating exposures with both a P&I and FD&D insurance implications.

The goal of the compendium is providing guidance on ship operations and management, shoreside management, so that shipowners are able to prevent potential P&I and FD&D related incidents and claims.

The report begins with a general guide on how to protect vessels, the crew and the environment from the impact of sub-standard and/or contaminated bunkers that find their way into ships.

Given the rapidly approaching IMO 2020 regulation, meaning the global implementation of 0.50% sulphur limit for the fuel oil used on board and the 1 March 2020 carriage ban of non-compliant fuel, in an exclusive interview, Ms. Charis Plakantonaki, Chief Strategy Officer, Star Bulk, discussed the scrubber issue and its pros and cons concerning the ship operator's perspective.

In the image below, the American Club present examples of regional and local scrubber related regulations. 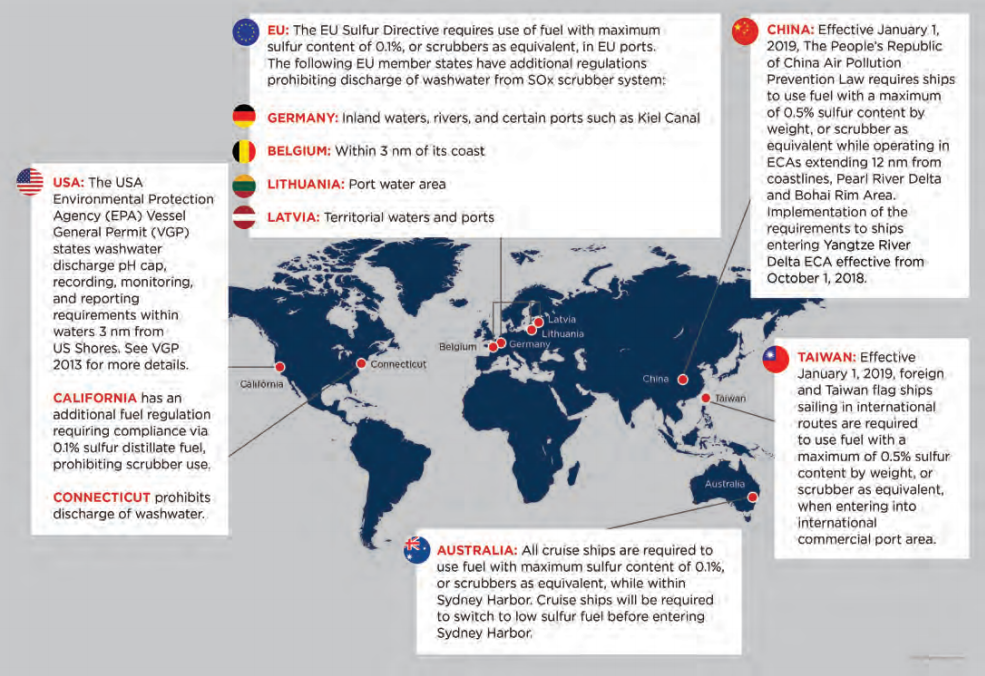 In addition, the compendium presents three bunker contamination incidents, their causes, damages, repairs and the costs that followed each incident.

Today, shipowners have the option to choose the installation of scrubbers, depending upon technical, operational and commercial factors to comply with the lower sulfur emission standards. The Club alerts that such costly investments require careful consideration and planning.

Moreover, the report focuses on the challengers shipowners will have to face to ensure the composition of marine fuels they acquire and consume are safe and reliable.

The US: For owners and/or charterers who have taken off-specification bunkers onboard at a United States (“U.S.”) port call, there are two considerations that will immediately come to mind: 1. what to do with the bunkers that are onboard but have not been consumed, and 2. what the options are for recovery of any damages against the bunker supplier or manufacturer. U.S. law imposes steep hurdles for both considerations.

Republic of China: As a Member State to MARPOL, China has been proactive in complying with the new sulfur requirement.

On 30 November 2018, China’s Ministry of Transport issued a regulation named The Implementation Scheme of the Domestic Emission Control Areas for Atmospheric Pollution from Vessels (“Implementation Scheme”) which has been effective from January 1, 2019. To comply with the new requirement, Chinese vessel owners are prepared to either use the low sulfur fuel (or cleaner fuels like LNG and nuclear energy) or install systems to remove sulfur oxides (SOx). Sinopec, a large state-owned oil supplier of China, plans to start the supply of low sulfur fuel oil this year in Eastern China ports as they believe the low sulfur fuel oil will be a mainstream option in the market

Singapore: More often than not, charter parties fail to provide for how sampling or testing of bunkers should be carried out in the event of a bunker quality dispute. It is recommended that the following should be considered or provided for: (a) joint testing in the event that the owners allege that the bunkers are offspecification27; (b) the party who will bear the costs of testing the bunkers; and (c) the tests which are to be conducted. 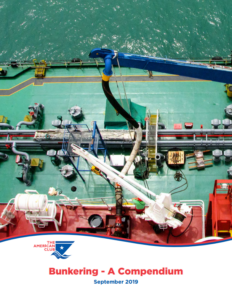