UK MAIB focuses on a collision that took place between an inflatable boat and a mooring buoy, on River Thames in London. The collision resulted to two passengers and the boat’s two crews, with minor injuries, that were later transmitted to the hospital. In the meantime, the commercially operated rigid inflatable boat suffered severe damages.

On Thursday, January 17 2019, Tiger One, a commercially operated rigid inflatable boat collided with a mooring buoy on the River Thames in London, with a speed of 26 knots in night hours.

According to the report, the skipper had no visibility of the mooring buoy in time to be able to take avoiding action. Possibly, the buoy’s light was difficult to see against the back scatter of shore lights and might also have been obscured to some degree by birds. 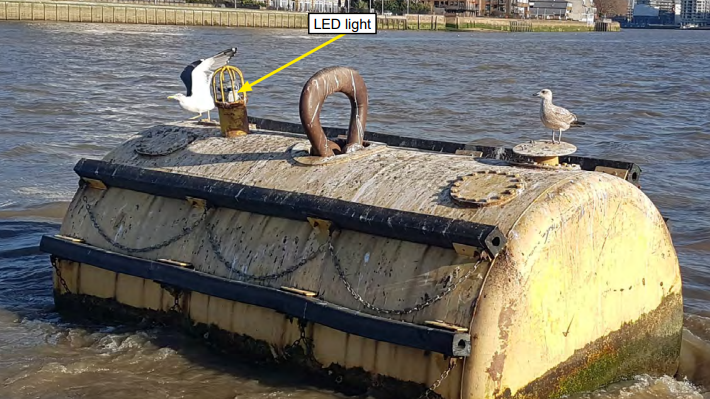 Moreover, the report supports that the skipper wasn’t that much experienced on navigating in night hours, through darkness.

He was navigating solely by eye and had either thought that Tiger One was closer to the centre of the navigable channel, or had forgotten that the buoy was there.

After the incident, the skipper called the coast guard asking for assistance. UK MAIB highlighted that the skipper informed for 10 than eight passengers that were onboard, reflecting the shock he was in.

The skipper’s urgency call was prompt, but his report that there were ten persons on board rather than eight, which was incorrect and misleading, was indicative of the degree of shock he had  experienced.

Following, after the incident, Tiger One’s owner, revised its safety management system, risk assessments and passage to include, among other things, procedures for navigating during darkness. Implemented procedures for the reporting of crew and passenger numbers to a designated person ashore.

In the meantime, actions were taken from the Port of London Authority, according to which:

Included guidance on night operations and the reporting of passenger numbers in its latest revision of ‘Passenger Safety on Small Commercial High Speed Craft and Experience Rides’.