Coconut charcoal to have caused the fire on Yantian Express

The Federal Bureau of Maritime Casualty Investigation (BSU) published an investigation report concerning the fire in the area of the deck cargo on board the container ship YANTIAN EXPRESS on the Atlantic Ocean, identifying Coconut charcoal as the likely cause of last year’s fire.

It was during the early morning hours of 3 January 2019, when a fire broke out in the deck cargo in the area of cargo hold 2 on board the German flagged container ship YANTIAN EXPRESS.

At that time, the ship was on the North Atlantic and was due to reach Halifax on the following day. 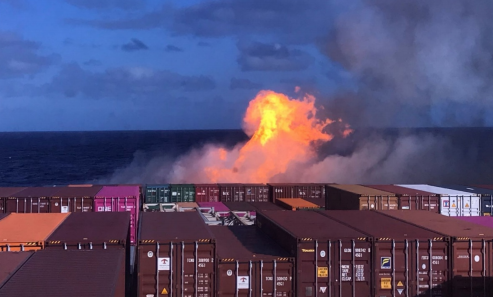 View of the bow of the YANTIAN EXPRESS/ Credit: Hapag-Lloyd

The ships command immediately ordered the crew to fight the fire. However, despite great dedication, the crew did not manage to contain the fire with shipboard resources and keep it under control, respectively.

It is now said that the spread of the fire to the superstructures could have been prevented. Namely, the shipping company concluded a contract with a salvage company very quickly. In the late evening on 4 January 2019, the tug SMIT NICOBAR, reached the operation site and took over the firefighting operations with the help of the extinguishing monitors.

Despite the action taken by the SMIT NICOBAR, the fire spread further in the deck area of cargo hold 1. Due to the overall situation, at first a part of the YANTIAN EXPRESS’s crew and later the whole crew, left the ship and transferred to the tug. 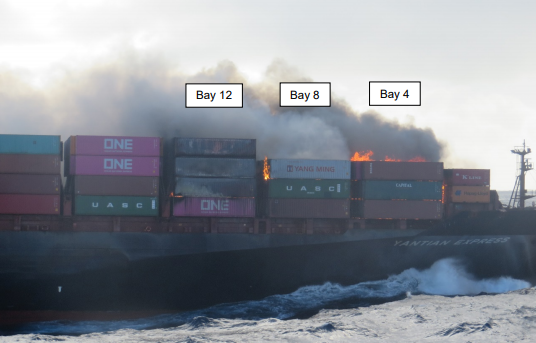 The MAERSK MOBILISER at the YANTIAN EXPRESS/ Credit: SMIT Salvage

Together with the crew, the salvage master started his work on the damaged ship as well. In the ensuing days, further tugs and supply ships reached the YANTIAN EXPRESS and took salvage experts and firefighters with their equipment to the scene.

The remaining crewmembers of the YANTIAN EYPRESS were taken to the next port by another ship of the shipping company. 19 days after the fire broke out, the salvage company declared the containers stowed on deck of the YANTIAN EXPRESS extinguished.

On 22 January 2019, towing of the ship towards the Bahamas started. Later on, the YANTIAN EXPRESS continued its voyage under its own power. In doing so, the tugs accompanied it. On 26 January 2019, the last burning containers in cargo hold 1 were extinguished and all fire extinguishing pumps were stopped. 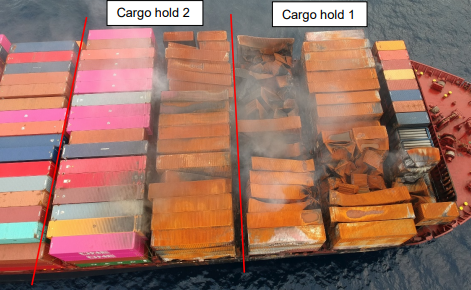 On 30 January 2019, tug and tow reached the anchorage of the port of refuge in Freeport, Bahamas. Several days later, the ship was allowed to sail into the port. On 19 February 2019, the unloading the containers in the area of cargo holds 1 and 2 started.

On 25 January 2019, the shipping company declared the general average in connection with the fire on board the YANTIAN EXPRESS. The Federal Bureau of Maritime Casualty Investigation started its investigation on board after the ship had arrived on the anchorage of Freeport.

In doing so, areas on the ship crucial for the development of the fire and the firefighting operations were inspected. The area where the fire broke out was inspected thoroughly in the port. Unloading of the containers of this area was observed.

However, the BSU investigation could not clarify the cause of the fire unambiguously. This was especially due to the very long duration of the fire and the intensive use of firefighting water which changed the origin of the fire strongly.

By procedure of exclusion, three containers which could possibly have caused the fire, were identified.

The BSU stresses that one of the containers was laden with Coconut Charcoal, which was erroneously declared Coconut Pellets. As regards this plant coal, analogies are shown to the marine casualty investigation BSU 455/15 – fire on the MSC KATRINA by self-igniting of the charcoal stowed in one container.

To explore more about the Federal Bureau of Maritime Casualty Investigation (BSU) report, you can click on the PDF bellow. 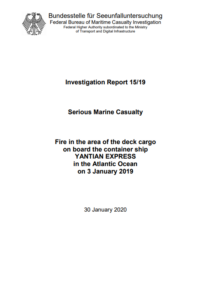