According to the recent report "Global Coal Power Set for Record Fall in 2019" published by Carbon Brief, the global electricity production of coal is about to fall by 3% for the 2019, making it the largest drop on record. The analysis was based on the monthly electricity sector data from every country, of the first seven months of 2019, compared with the same period in the preceding year.

The Centre for Research on Energy and Clean Air along with Sandbag and the Institute for Energy Economics and Financial Analysis (IEEFA) collaborated and focused on the Global electricity production of coal.

Although in the last decades coal production has marked an intensive and uninterrupted growth, the analysis suggests its production of 2019, is about to note a 300 terawatt hours (TWh) reduction, more than the combined total output from coal in Germany, Spain and the UK last year.

Moreover, the study showed that the expecting falls are coming from developed countries, such as Germany, the EU overall and South Korea. The largest decrease is marked in the US, since many large coal-fired power plants have closed. Specifically, US noticed a down of 13.9% in coal-fired power for 2019, comparing with the same period in 2018.

At just 4.6% of the world’s total coal-fired power generation in 2019, the Southeast Asian region is not big enough to compensate for the dramatic cuts in thermal coal use in the U.S, the European Union and South Korea, and the ongoing slow decline in Japan.

...as reported by Tim Buckley, co-author of the report and director of energy finance studies at IEEFA.

The data analysis further showed that India's coal output is about to fall as well, making it its first drop in the last three decades. At the same time, China's electricity demand growth has slowed to 3% for the 2019, a 6.7% decrease over the last two years. On the other hand, only the south-east Asia has noticed significant increases in coal generation. 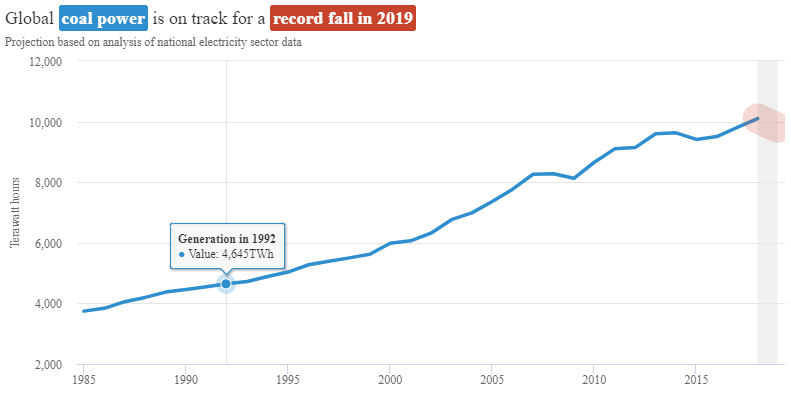 This global coal decrease may has negative impacts for the countries' economy, as it hits the global average utilisation of coal-fired power plants, affecting the profitability of the existing and planned capacity. Concluding, the reduction will also affect the global's CO2 emissions growth for 2019. Nevertheless, global coal use and emissions remain far higher than the level required to meet the goals of the Paris Agreement.

... said the co-author of the report, Tim Buckley.

To explore more about the report of the Global Coal Power Fall in 2019, you may click on the PDF below: 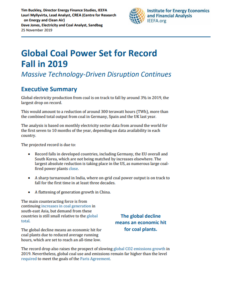