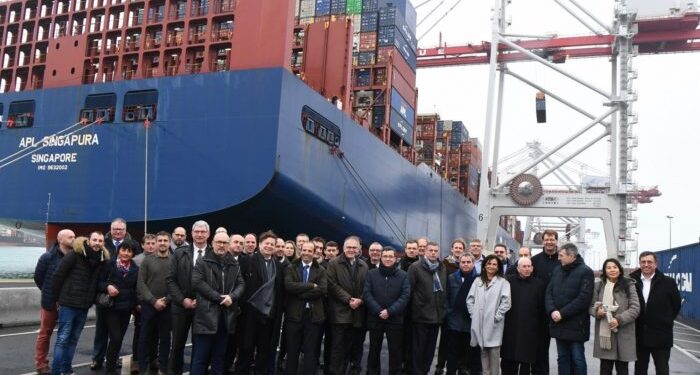 On Wednesday, January 8, the APL SINGAPURA, a CMA CGM Group container ship, inaugurated the cold ironing facilities of the Terminal des Flandres in the Port of Dunkirk. Through this innovative system auxiliary engine emissions from vessels at berth can be eliminated, thus improve air quality and reduce noise pollution.

CMA CGM highlights that the cold ironing system installed at the Terminal des Flandres will become fully operational during the first half of 2020.

Stéphane Raison, Chairman of the Port of Dunkirk Executive Board, added: “Our decision to develop this particularly innovative solution allowing container ships to plug into onshore power at the Terminal des Flandres is in line with the pro-active environmental policy that the Port of Dunkirk has been pursuing for many years.”

In fact, by plugging into an onshore electricity supply, also known as “cold ironing“, container ships calling at ports can shut down their auxiliary engines while still getting the power they need, particularly in order to maintain controlled temperatures in refrigerated containers called “Reefers“.

Port of Hamburg plans to use drones to improve port operations

This technology has significant environmental benefits, such as zero emissions of sulphur and nitrogen oxides and fine particles while ships are at berth, as well as significantly reduced noise pollution.

A consortium of the companies Brest and Boulogne, ACTEMIUM, was selected to carry out the works; these included the design and supply of a cold ironing system that fits into six 40-foot containers, converting the public electricity supply for use by ships at port.

The operation was co-financed by the Urban Community of Dunkirk; the Hauts-de-France region, through the European Regional Development Fund, as well as the Port of Dunkirk. The CMA CGM Group covered the cost of the equipment needed to connect the vessel, in line with its efforts to support energy transition in the industry.

This system is one of the most powerful to ever be installed in Europe, with the capacity of 8 MW, which is enough to power about 1,000 homes.

We are ready to test this system with other European port authorities that are committed to using cold ironing at their container ship terminals, as the Port of Dunkirk has successfully done.

In December the CMA CGM Group was collaborating with Shell to supply tens of tons of marine biofuel to its fleet, enabling the Group’s ships to sail with nearly 1 million kilometers, equivalent to over 80 round-trips between Rotterdam and New York.

CMA CGM was the first shipowner in the world in 2019 that successfully tested the use of a marine biofuel onboard the container ships CMA CGM White Shark and Alexander Von Humboldt.

The group opts for marine biofuel, composed of 80% LSFO and 20% biofuel made of used cooking oil; the biofuel used reduces greenhouse gas emissions by 80% and virtually eliminates sulphur oxides emissions.

What is more, during the recent French Maritime Economy Conference (Assises de l’Economie de la Mer), CMA CGM’s Rodolphe Saadé called the French President, Emmanuel Macron to initiate an international coalition for the energy transition of the transportation sector whose priority will be to develop a more competitive and less carbon-intensive energy source.

Rodolphe Saadé namely stressed the need to improve the cooperation of all those working on near-term solutions to replace fossil fuels in the transportation and logistics sectors. The French President accepted to actively support this initiative, whose first forum could be held on the occasion of the World Conservation Congress to be organized in Marseille in June 2020.