Year in review: How the maritime security landscape evolved in 2019 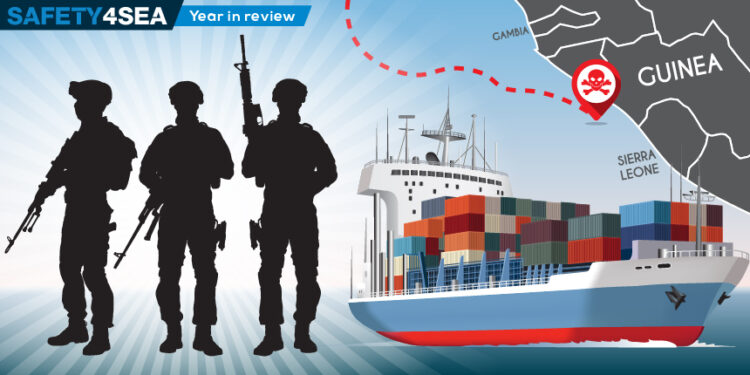 The year 2019 was a fly in the ointment for the history of maritime piracy, with Gulf of Guinea undoubtedly claiming the title of the world’s worst piracy hotspot. Although IMB figures indicated a decrease in the number of incidents for the first nine months of 2019 compared to the same period in 2018, piracy in terms of crew kidnappings reached another record high this year, pushing shipping to rethink its approach on maritime security.

While 2017 was remembered for a resurgence in Somali Piracy after a calm five-year period, 2018 revealed a dynamic danger presence in Nigerian waters and 2019 came to validate this alarming trend, with an unprecedented number of attacks occupying the shipping news agenda.

And while the Gulf of Guinea was definitely in the spotlight regarding African piracy, continuous unauthorized boardings on ships underway in the Singapore Strait was another area of concern for Asian piracy this year.

IMB reported a total of 162 incidents of piracy and armed robbery against ships worldwide, in comparison to 201 reported incidents in 2018.

Overall, the incidents for 2019 included:

The Gulf of Guinea accounted for over 90% of crew kidnappings globally.

Timeline of crew kidnappings in the Gulf of Guinea

Only the 2nd day of 2019, pirates attacked the container ship MSC Mandy off Benin, West Africa, kidnapping six out of the 24 crew members. The crew was released in late January.

Pirates attacked the Maltese-registered tanker ‘Histria Ivory’ and kidnapped three of its 21 Romanian crew members, while voyaging through the Gulf of Guinea. Reports say the crew was released in early April.

Pirates kidnapped four crew members from the Liberian-flagged container ship ‘Contship Oak’ in the evening hours of March 30th, while the ship was in Douala Anchorage, some 15 nautical miles Southwest of Douala, Cameroon.

During its surveillance and maritime security operation in the Gulf of Guinea, the “Serviola” patrol boat managed to free the crew members of a merchant ship held by a group of nine pirates, on April 9, which had been kidnapped for four days.

Boskali’s heavy transport vessel ‘Blue Marlin’ was hijacked on Sunday, May 5, about 80 nautical miles off Equatorial Guinea, but the crew was soon freed due to professional response of the crew and a coordinated support from the navy of Equatorial Guinea and Spain, the company said.

Ten Turkish seafarers onboard the Paksoy 1 freighter were kidnapped by pirates in the Gulf of Guinea, on Saturday night, 13 July, while the ship was on anchorage at the port Tema, Ghana. They were set free one month later after ransom payment.

The MarMalaita was attacked by pirates on 14 August between 23.00h and 24.00h local time on the anchorage of Douala / Cameroon. Pirates took 8 of the 12 crewmen, who were released about 40 days later.

Pirates boarded the tanker ‘Elka Aristotle’ on 4 November, off Lome, Togo, kidnapping 4 crew members, despite having at least one security guard onboard. The four crew members were released about 40 days later, but one Filipino hostage died to illness.

Pirates boarded the tanker ‘Nave Constellation’ and kidnapped 19 of the vessel’s crewmembers, while the vessel was sailing around 100 nautical miles off Bonny Island, Nigeria on 3 December. The crew were released on 21 December.

Six pirates boarded the Marshall Islands-flagged tanker “Duke” on 15 December, Sunday, which was sailing from Luanda, Angola, to Lomé, Togo and abducted all 20 but one crew members; This marks the largest incident taking place in West Africa for 2019. Contact has been established and latest data reveal the crew are safe but are yet to be released.

On the last day of 2019, pirates attacked the Greek-flagged tanker “Happy Lady” from Limboh port in Cameroon and kidnapped 8 crew members. One crew was reportedly was injured.

Trends in piracy and armed robbery in Asia

If the Gulf of Guinea was a hotspot for piracy in Africa, the Singapore Strait was the one for piracy in Asia, with a feeling of lower danger for crews themselves but of higher frequency of events.

The first half of the year also saw an alarming trend of incidents involving tugboats towing barges in the Singapore Strait, with a total of 14 incidents reported only until 15th August. Of these, nine incidents reported loss of scrap metal from their barges.

In mid-June, a group of heavily armed men, suspected to be linked to terrorist group Abu Sayyaf, kidnapped a total of 9 crew men from two fishing vessels in Malaysian waters off Sabah, in the early morning hours of Tuesday. They were released three days later, after the abductors realized the crew had no ransom to give.

Implications surrounding maritime security are not limited to piracy. 2019 was a year of diplomatic tensions vastly affecting shipping and causing insecurity, disruptions along major shipping routes and therefore in trade, as well as seafarers’ safety and the world economy. It all started in May, with a multiple attack against ships off UAE and continued with another similar incident about a month later in the Strait of Hormuz.

Tensions escalated between Iran and the West, with major shipping lines hesitating sending their ships in a major shipping route for world’s oil supply. The shipping community condemned the attacks, noting that this is an intolerable situation threatening the future of the industry.

The ongoing crisis started in early May, when the US ended waivers that had allowed some mainly Asian importers to continue buying Iranian crude, in the wake of its withdrawal from the JCPOA.

On 8 May, Iran announces it will relax some curbs on its nuclear program, stopping short of violating its 2015 deal with world powers, but threatening more action if countries do not shield it from US sanctions.

-10 May:  US MARAD issues a warning that Iran could target US commercial ships, including oil tankers, sailing through key Middle East waterways.

-12 May: The first of the two major attacks is reported with an attack against four ships, including two Saudi oil tankers, in the Gulf just outside the Strait of Hormuz, a major oil shipping route. US officials pin the blame on Iran, a charge Tehran denies.

-13 June: The second major attack occurs, involving two tankers south of the Strait of Hormuz. US again blames Iran, but Tehran denies accusations. Meanwhile, oil prices surge by 4% in the next few days.

-20 June: Iranian forces shoot down a US military surveillance drone over the Strait of Hormuz.

June: US proposes some sort of multinational effort open to all allies and partners to bolster maritime security in the Strait.

-5 July: An Iranian Revolutionary Guards commander threatens to seize a British ship unless the Grace 1 is released.

-19 July: Iranian authorities seize British-flagged oil tanker ‘Stena Impero’, in the Strait of Hormuz. The incident spiked the tensions in the area, as UK condemns this act as ‘hostile’, denying Tehran’s argument that it seized the vessel because it was involved in an accident. This is considered as an act of retaliation over the seizure of Grace 1.

-25 July: The UK announces that the Royal Navy will escort British-flagged vessels when sailing through the Strait of Hormuz.

-2 August: The Strait of Hormuz is temporarily designated as a High-Risk Area, giving seafarers the right to refuse to work onboard vessels transiting the Strait.

-7 November: The US Central Command announces the opening of Coalition Task Force (CTF) as a new command center at Naval Support Activity, Bahrain, to support Operation Sentinel aiming at safe navigation in the Arabian Gulf, Strait of Hormuz, the Bab el-Mandeb Strait and the Gulf of Oman.

-24 November: France’s defense minister announces that a European-led mission for protection of Gulf waters will be hosted by a French naval base in UAE.

In case you did not have enough, explore here two maritime history cases of terrorism at sea, as part of our ‘Learn from the Past’ series:

This article has been updated to include incidents reported up to the last day of 2019.