Why scrolling and not sleeping? A look into ‘revenge bedtime procrastination’ onboard 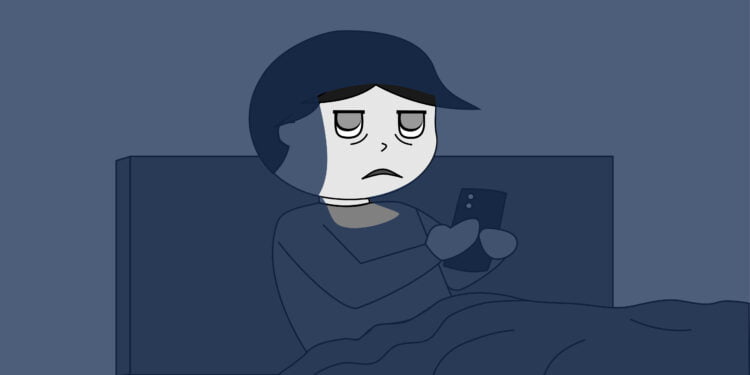 It is bedtime, you are exhausted, and just want to sleep. You lie down holding your phone just to check on social media for a few minutes and end up scrolling for hours, even though your eyes are closing and even if you know that you have to wake up early tomorrow morning. Sounds familiar?

This is known as “revenge bedtime procrastination” and describes the phenomenon in which people refuse to sleep early because they feel they did not engage in the activities that they wanted during the day. This “procrastination” becomes an attempt to regain some sense of freedom during late night hours or, in other words, sacrificing sleep for some leisure time.

“Bedtime procrastination”, as a term, was first seen in an academic paper of 2014, while the term “revenge” was first added in China (“報復性熬夜”). However, the term became popular following a viral tweet by journalist Daphne K. Lee in 2020. The term has probably become more relevant today than earlier as this procrastination relates to modern days’ distractions, such as TV and social media.

Learned a very relatable term today: “報復性熬夜” (revenge bedtime procrastination), a phenomenon in which people who don’t have much control over their daytime life refuse to sleep early in order to regain some sense of freedom during late night hours.

Why does revenge bedtime procrastination occur?

The main cause of the phenomenon is considered to be the capitalistic way of life and, more specifically, the length of working hours in combination with the fast pace of life that often leave the sense that we do not have much control in our lives. For example, this happens when people leave home for work in the morning and return at night. In other words, we are talking about a situation where we have no time to relax. The problem is that our brain – consciously and unconsciously – knows that we need to rest in order to be productive the next day, so we squeeze some quality time alone through our cell phone or our television, during the only time we have free time; the time when we should be sleeping.

What does this mean for seafarers?

Fatigue has generally been a major chapter in the discussion on seafarers’ wellbeing, not only due to workload and hard hour-shifts, but also due to poor sleep quality. Unlike quantity which counts the hours, quality refers to uninterrupted and/or restorative sleep, which is considered to increase your ability to gain new insight into complex problems by 50%. Being awake for work at night, or in the early morning or working for extended periods can disrupt your body clock, resulting not only in increased fatigue, but also in disruption of the body clock and thus difficulty to sleep during “normal” sleep hours.

If we take this for granted, it is easy to understand why this is a relatable problem for seafarers. For many seafarers, working patterns conflict with their body clock which creates disruption of sleeping patterns and could potentially make this professional group prone to such behaviors. Our body clock programs us to be active during the day and to sleep at night. This means that, at night, we are least alert and more likely to make mistakes and fall asleep. Bedtime procrastination can cause sleep deprivation, which can on its turn lead to poorer judgement, memory and decision-making (see previous discussion on watchkeepers being most at risk from falling asleep on duty) as well as increasing depression and anxiety.

Meanwhile, the prolonged stay onboard and isolation associated with the COVID-19 pandemic has likely boosted the need of connection with other people, which cannot be covered with individual activities like exercising, but can be addressed with Internet use.

Feeling prone to such behavior? The first thing we could advise you to do is to set a sleep routine by keeping a consistent bedtime and wake-up time, but we know this is not feasible on a ship requiring 24/7 services. But there are always some smaller tips that can help maintaining a sleep hygiene onboard, such as:

Final note… Fatigue is a safety hazard and managing shipboard fatigue and its associated risks is shared responsibility of both the company and the seafarer. Ship operators should respect ‘rest’ periods and apply fatigue risk control measures accordingly, while, as a professional, the seafarer should always be aware of fatigue and how to counter its effects in a personal level.