Who is who at an oil spill: Roles and responsibilities

by The Editorial Team
in Maritime Knowledge, Pollution

Above image is used for illustration purposes only / Credit: Shutterstock/ Nightman1965

An oil spill is the potential adverse effect of most maritime incidents. Oil spills can have disastrous consequences, environmentally and economically. Oil spill response at sea is most times a complex procedure, because of the remoteness of the site or the number of interested parties.

A spill may take weeks, months or even years to clean up. Oil spills at sea are generally much more damaging than those on land, as they can spread for hundreds of nautical miles polluting a great extent of coastlines, killing marine life, destroying ecosystems and damaging local economies, fishery and tourism.

With this respect, an effective oil spill response requires an efficient understanding of roles and responsibilities of each interested party.

So, let’s explore the leading actors and affected parties in a marine oil spill incident:

The decision to appoint salvors is usually made jointly by the P&I Club, the shipowner and/or government agencies.

-The shipowner: In some countries, the shipowner is responsible for carrying out the oil spill response under government guidance, while in others the government takes the lead.

-The cargo owner: The cargo owner supports response efforts by providing precise information on the cargo. They are likely to have their own lawyers and surveyors at the scene.

-Clean up contractors: They provide the equipment and work for response activities. They may be pre-contracted by the shipowner, hired at the time of the incident by the shipowner or P&I club or engaged by the authorities.

-Surveyors: They are responsible for carrying out a variety of surveys following a spill, including surveys of the oiled shoreline, response measures, fisheries and any damaged cargo. They are typically engaged by the correspondent on behalf of the P&I Club and shipowner.

-Government authorities: They usually lead or oversee the response depending on the scale of the incident. Agencies involved include: Coast Guard/ Navy, Ministries of Transport, Environment or Emergency affairs.

-Claimants: Those who have suffered financial loss due to an oil spill, for instance, fishermen whose boats are oiled. Claimants can be thousands in a major incident. Compensation is prescribed under national legislation and may be paid according to applicable international conventions.

-Wildlife responders: Environmental groups or charities may provide trained responders to capture and rehabilitate oiled wildlife. Some environmental NGOs may act as lobbyists to influence the response.

-Other advisers or experts: This category includes government departments or independent technical specialists in fields of fisheries, tourism, environmental monitoring or public health. Hull and machinery insurers and their representatives may also be involved.

-P&I Club: Third party insurers who assist the shipowner in dealing with the incident, including legal advice, finding appropriate advisers and contractors, approving claims for compensation.

-Lawyers: They may be appointed by several parties, including the shipowner and the government.

-ITOPF: The International Tanker Owners Pollution Federation Limited, established in 1968 on the aftermath of the TORREY CANYON disaster, supports and assists all parties involved with a spill by providing objective technical advice, usually after request of a P&I Club.

Media will always be involved in a major incident, with reporters trying to get access to the spill site to take footage or interviews. Members of the public, also known as “citizen journalists”, are also likely to be active in filming the spill.

Explore more at the following infographic by ITOPF: 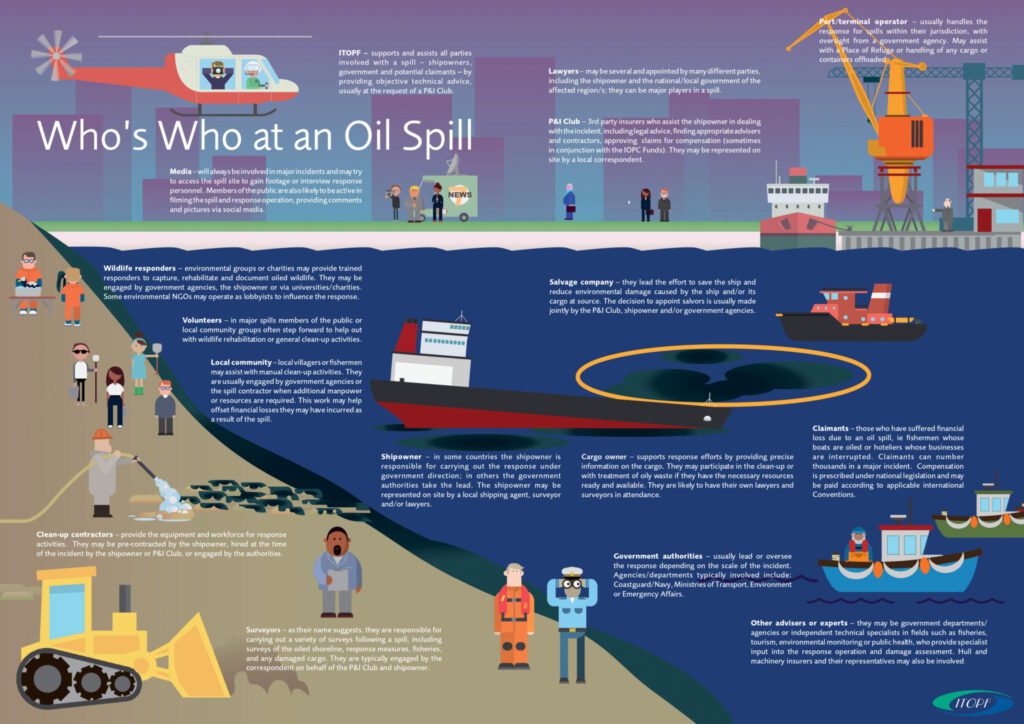