The role of education in attracting more women at sea 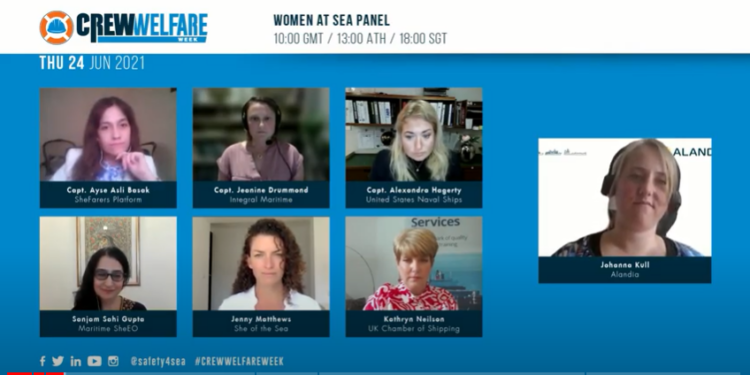 Education from a young age is the starting point for maritime industry to deal with gender stereotypes, which have traditionally left women off shipping careers, and to attract diverse talent that will bring high-intelligence and problem-solving skills in the sector, panelists during the SAFETY4SEA Crew Welfare Week agreed.

While the industry continues its efforts to change the perception and prejudice that suggests that shipping is too technical for women, we continue to observe a major gender gap onboard with the recruitment of women at sea remaining a grey area. This triggers the vital need for the industry to think what changes are required for the industry to become more inclusive and diverse, the SAFETY4SEA Panel heard.

A huge problem is marketing, because there is not enough publicity on the sector as a potential professional path, noted Capt. Alexandra Hagerty, US Naval Ships, pointing out the huge opportunities of getting children at a young age to know the benefits of the industry.

A young teacher asked a group of 8-year-olds to draw a picture of a pilot, an astronaut, a fireman and a doctor and every single child in that class drew the picture of a man in those roles. This is the challenge we face, and it starts with the younger generations. If we are going to change culture, we have to address it at a young age, before they start to form gender stereotypes at the age of 11-13. That is where our focus should remain.

Why is the low number of women at sea a problem?

Women intelligence may bring a new era for maritime and other industries’ studies can explain how the success is directly related to more women, said Capt. Ayse Asli Basak, Co-Founder, SheFarers Platform.

“We have seen that companies which have more women in the room have more consistent the improvement of financial profits…Additionally, the fast-paced technologies in the industry will open more positions which need higher intelligence skills and women have these skills”…she said.

When there are few numbers of women onboard, there are higher cases of discrimination, explained Mrs. Sanjam Sahi Gupta, Founder, Maritime SheEO. This means that getting jobs onboard ships is a problem for these young women as they probably won’t get equal pay or be accepted by the crew.

On her part, Mrs. Neilson informed that the Chamber has found that putting a man and a female onboard can make a huge difference: “I work with cadets and one of the biggest challenges is putting young people onboard with other person that is female because we found that retention rates dramatically drop if we don’t put them on with another female because sectors such as cruise and ferries don’t seem to have a challenge but the minute you put a young female engineer in training onboard a cargo vessel, that is when the challenges arise. So, we have to be wise and make sure that we support them onboard and give them also someone else there to support them. This also gives them the confidence to speak out and stand up for themselves”…she said.

In addition, Mrs. Jenny Matthews, Founder, She of the Sea added two reasons supporting the need of more women in shipping:

If we are ignoring 50% of the potential talent to come in, we are going to see a real problem coming in the next years.

Moving forward, panelists also agreed that real gender inclusion comes when an organization adds women at the top level of the hierarchy and that having more women send a message about the company: that they are committed to diversity.

“It is very important to have role models because other women get inspired which is very encouraging,

What are the best practices for recruitment of more women in management onboard?

“Many of the men we work with have the same struggles and family issues. It is important to recognize they have the same challenges…It is really important that we get them onboard so that they believe what we want to achieve. And if we do that, we are getting there a lot quicker”…stressed Mrs. Neilson.

“First, if you want to apply to accompany, you go to their website and you see pictures of men only, this discourages you to apply. So, it important how you communicate (as a company). Speak openly, so that women know that you will hire them. Second, men are the keepers of the power now and they need to be part of the solution.”…noted Mrs. Gupta.

Concluding, the panelists touched upon the changing leadership styles that are becoming far more inclusive, empathetic, motivational, agreeing that these should be gender neutral.

“Gender is useful as hair color when it comes to identifying leadership qualities…If we rely on gender to tell us who is a good leader we are really deceiving ourselves”…said Mrs. Matthews.

“We still have a lot of work to do in feasible role models. And it is definitely about letting to be yourself”…said Capt. Jeanine Drummond, Managing Director & Principal Marine Advisor, Integral Maritime.

“Male or female, you must have the right GRIT and integrity to be out there”…noted Capt. Hagerty.

“With the autonomous vessels appearing in the horizon, there are far more opportunities for women to move ashore than ever have been in the past”…said Mrs. Neilson.

View the presentation of the Women at Sea Panel herebelow