The outcome of COP27: Slow progress for shipping decarbonization 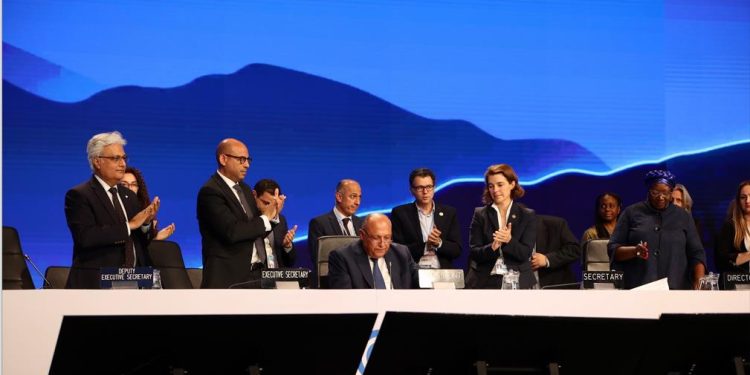 The 27th UN Climate Change Conference (COP 27) wrapped up Sunday with a historic decision to establish a loss and damage fund for vulnerable countries hit hard by climate disasters. And while the high-level meeting was expected to set a more ambitious timeline for shipping to decarbonize, the progress on climate ambition was generally perceived as weak.

From 6 to 20 November, the 27th Conference of the Parties to the United Nations Framework Convention on Climate Change, or more commonly known as COP27, gathered over 45,000 participants, including more than 100 Heads of State, government representatives, scientists, policymakers and activists, in the Egyptian coastal city of Sharm el-Sheikh to discuss the future of climate action around the world and across different sectors.

After two weeks of extensive negotiations, #COP27 has concluded with a hallmark implementation plan #SHIP, and a historic deal for agenda item and outcome on #LossAndDamage funding. pic.twitter.com/clEmx0TV7x

Why was COP27 important for shipping?

Along with other controversial industries, shipping shares a significant contribution to climate change—with annual industry emissions equal to those of Germany, according to CBC. And although these emissions must be eliminated by 2080 for the industry to align with the Paris Agreement, the IMO’s current plan is to halve emissions by 2050.

For shipping, this year’s COP was important as it was the last COP before the IMO meets in MEPC 80 in spring 2023 to decide its final GHG strategy for decarbonizing the industry. This means that the general sentiment on the world’s decarbonization during COP27 showcased to shipping policymakers that the shift to a greener industry is possible. The COP 27 meeting also has become a crucial opportunity for industry and governments to negotiate terms.

"Last week I attended the #COP27 @UN climate conference in Egypt. There can be no doubt that tackling climate change is one of the greatest challenges of our time," said IMO SG during the Saudi International Maritime Forum. Full speech here: https://t.co/2dTy9mGPxP #SIM2022 pic.twitter.com/is6H5A6BNA

An overview of COP27 outcome

The main outcome of COP27 was a ground-breaking decision by governments to establish new funding arrangements, as well as a dedicated fund, to assist developing countries in responding to loss and damage. In practice, this means that rich nations would pay poorer countries for the damage and economic losses caused by climate change, like flooding and drought.

During the negotiations, the EU supported the idea of contributions from oil and gas companies, as well as levies on air tickets and shipping containers, to go towards a loss and damage fund.

The COP27 text also outlined the need to reduce GHG by 43% by 2030 (compared to 2019), which represents the same commitments made in Glasgow last year. “It does not break with Glasgow completely, but it doesn’t raise ambition at all,” Norway’s Climate Minister, Espen Barth Eide, told reporters.

No progress on fossil fuels

The creation of the fund was generally welcome, but the level of ambition achieved in COP26 last year was downgraded as COP27 did not bring enough added efforts from major emitters to accelerate their emissions cuts. Most importantly, the final COP27 deal did not include commitments to “phase down” or reduce the use of fossil fuels. As a result, several nations and groups such as the UK, EU, and New Zealand left Egypt unhappy with compromises on fossil fuels and curbing climate change.

COP27 has kept alive the goal of 1.5C. Unfortunately, however, it has not delivered on a commitment by the world’s major emitters to phase down fossil fuels, nor new commitments on climate mitigation. But the EU will stay the course, notably through the European Green Deal and REPowerEU, because it is essential to keep the ambition of the Paris Agreement within reach,

The COP27 text also included ambiguous new language about “low emissions energy” – which experts say could pave the way for some fossil fuels to have a share in the green energy future.

This was perceived as a disappointing outcome for shipping which has been exploring ways to move away from fossil fuels in order to decarbonize. The key pathway to end fossil fuels in the industry is through global regulation that will attract respective investments, noted Maersk’s Chief Advisor for Green Transition Concepción Boo Arias during COP27.

What about green shipping corridors?

Signatories of the Clydebank Declaration during COP26 last year agreed to establish at least six green shipping corridors by the middle of this decade. On the occasion of this year’s COP event, the Zero to Mission coalition issued an Annual Progress Report on Green Shipping Corridors, identifying a major progress with more than 20 green corridor initiatives across Transpacific, Asia Pacific and Transatlantic regions, Europe, North and South America.

With decarbonization in mind, the United States and Norway collaborated to launch a Green Shipping Challenge at the COP 27 World Leaders’ Summit, on November 7. The Challenge encouraged governments, ports, and companies to prepare commitments to spur the transition to green shipping, which resulted in more than 40 major announcements on issues like shipping innovation, next-generation vessels, and low- or zero-emission fuels.