The difference between being a leader and a self-aware leader

Lately, there have been many signs that leadership development is being flawed; an assumption rising from the fact that although people search what behaviors to change in order to become a better leader, they do not search how to change those behaviors. It is of essence therefore, to generate a discussion on leadership development focusing on the self-awareness part which is probably the foundation to ensure good leadership. Here's why;

As one’s power grows, one’s willingness to listen shrinks, either because they think they know more than their employees or because seeking feedback will come at a cost.

We have been through the term “self-awareness” in previous articles explaining emotional intelligence & professional resilience. At this point it is important to mention the self-competence field in general, which includes:

Focusing on the self-awareness ability, anyone could say with confidence: “I am quite self-aware”. However, this is a hard skill to define; self-awareness is an ongoing process involving the following:

Considering the aforesaid, being self-aware means being conscious of your strengths while acknowledging what you can learn from the people around you. 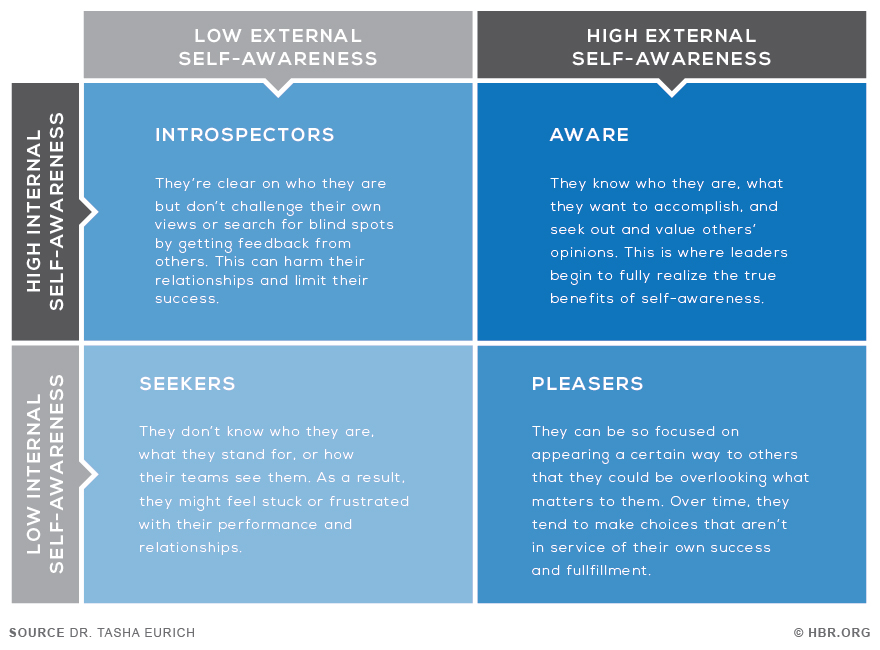 But why is self-awareness important to leadership?

As mentioned above on an interpersonal level, self-awareness’ benefits can be great; bring the trust of others or increase one’s credibility. But on an organizational level, it makes you a better leader as you acknowledge what you have yet to learn; you’re admitting you don’t have all the answers; you ask for help. Thus, great leadership starts with high self-awareness as it lays the foundation upon which emotional and social intelligence is built. In other words, it helps leaders link their emotions to the effectiveness of their interactions with others. Several studies/researches conducted in the past years verify the aforesaid. Specifically:

Bill George, a professor of leadership at Harvard Business School, and former CEO of Medtronic, says that:

Research published in Nature Neuroscience has found that a short daily mindfulness practice leads to changes in the structure and function of the brain that enhance self-awareness.

Apostolos is a Maritime Safety, Quality & Environmental Expert, Consultant, Trainer and Project Manager with more than a 20-year background in shipping as Technical, Marine, Safety & Training Superintendent and Consultant. He entered the industry back in early 90’s as Engineering Superintendent with a leading ship manager operating a mixed fleet of bulk and oil/chemical tankers. He then shifted to regulatory compliance and QHSE as superintendent and later as a Consultant and Trainer. Apostolos has successfully completed a wide range of QHSE projects including 250+ management system projects (ISM/ISO 9001-14001-18001/TMSA/MLC), 500 vessel and office audits to various standards and he has trained more than 8,000 people in a wide variety of QHSE subjects. He has also presented and chaired to more than 40 conferences. He holds Mechanical Engineering Bachelor and Master’s specialising in Energy & Environment and Master’s Degree in Maritime Business and Business Administration (MBA), all of them awarded with distinction. Apostolos is the Managing Director of SQE MARINE, SQE ACADEMY and Managing Editor of SAFETY4SEA.