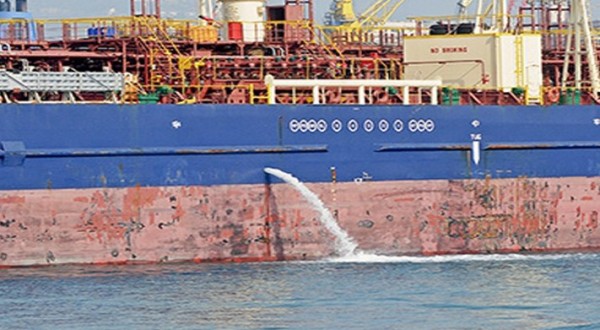 State of the Market: When will we hit peak ballast?

During the second SAFETY4SEA Singapore Forum, Jad Mouawad, CEO, Mouawad Consulting AS, shared experience on the current BWMS market landscape. Starting his presentation with a timeline of schedules for fitting BWMS on ships with type approval requirements, he continued with key forecasts on BWMS retrofits and analyzed these figures with respect to the future. He concluded his presentation with future scenarios on BWMS regulatory and market developments.

The Ballast Water Management (BWM) Convention aims at reducing the risk of transport of invasive species through ships´ ballast water from across oceans and across ports. This is a problem that has become very significant with the increase of steel ships and is now becoming a major problem for the ocean’s ecosystems. The BWM Convention has entered into force two years ago. At that date, ships started doing ballast water exchange in the middle of the oceans, which means that water taken from harbors is exchanged with “cleaner” mid-ocean water, before being discharged again at the deballasting port.

As of 8th September 2019, the convention requires ships to start meeting a given discharge standard (D-2 standard) by their upcoming IOPP Renewal Survey. This is a maximum allowable numerical number of organisms per cubic meter of discharged ballast water and per milliliter depending on the size of organisms.

The vast majority of the ships will comply with the D-2 standard by treating the ballast water with conventional treatment systems: UV-based, ozone-based, electrolysis-based. You basically filter the water and you treat it with some UV, or you filter it and you throw some chlorine on it in many different ways. Many treatment methods without filtration are also available (like heat treatment and other chlorine-based treatments). Ballast Water Management Systems (BWMS) must comply with a very complex and long type approval process before they can be used onboard ships for them to meet the D-2 standard (i.e. the ship must meet the D-2 standard through its discharge, not the BWMS).

As of 2018, we have experienced a large increase in demands for engineering services for retrofit. This trend has accelerated in 2019 and we expect to reach a peak in 2022 and 2023. Similarly, we are experiencing an increase in demand for being onboard ships and doing supervision and commissioning of installations in China. We anticipate that some 70% of all dry docks take place in China, and those will include fitting a BWMS. Our estimates are that the increase in engineering will go hand-in-hand with the increase in commissioning and supervision in China.

The graph below shows the anticipated number of ships that must comply with the IMO´s D-2 standard up until 2024. The numbers are compiled using the estimates from class societies based on their IOPP Renewal Certificates. 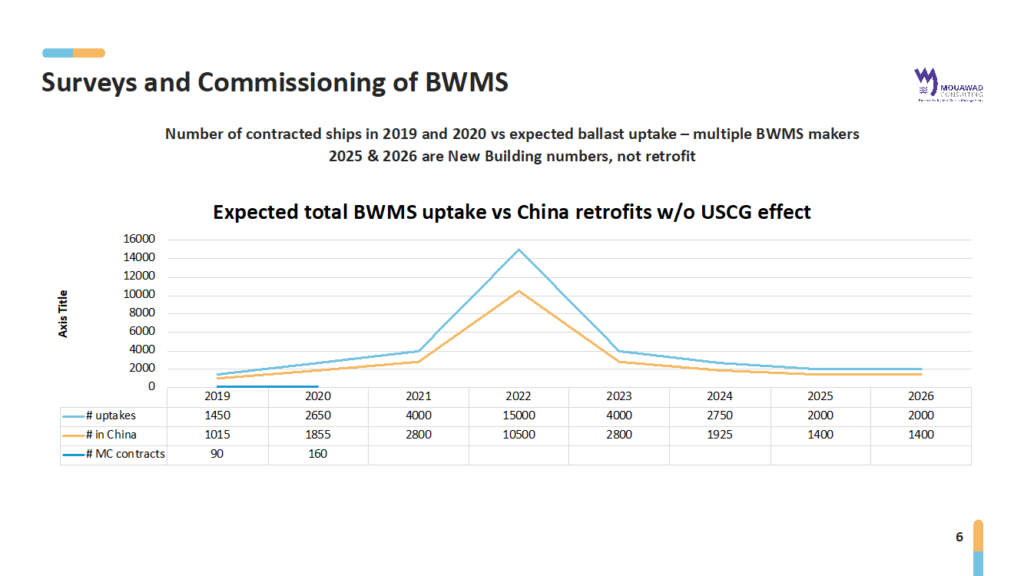 From the graph above, we notice a sharp increase in the number of ships that must comply with the D-2 standard, in 2022. There has been a lot of warnings and doom scenarios about those numbers when each class society published theirs, showing the same trend. The doom scenario is the lack of drydock capacity in 2022 to take all the ships as needed.

However, if we look at the historical reasons for this sharp increase and do some reflections, we can conclude that those numbers do not necessarily reflect what will happen in reality:

Despite very clear warnings against this, major flag administrations and NGOs ignored this fact and went on to allow this malpractice and potentially produce a bottleneck.

In addition to the above, the US Coast Guard has their own ballast regulations. So if a ship intends to discharge ballast water in the US, it must use a US-type approved BWMS.

The Coast Guard does not follow the same extension and implementation regime of the IMO; their implementation schedule involves first planned drydock after 1 January 2014 or 2016, depending on the volume of ballast water of the ship. We estimate that some 5000 ships will retrofit a BWMS prior to their IOPP scheduled renewal survey, to meet the requirements of the USCG; this will take place in 2020 and 2021, further flattening the peak of 2022.

Despite the possible spread of retrofits between 2020 and 2022, we expect to see an increased decline in the quality of the work that will be done onboard ships because all stakeholders won't have enough time to prepare properly.

We have started experiencing this phenomenon already in 2019, where few months lead time for survey and engineering, including pre-fabrication, is expected. While we recommend a 6-months process to do proper selection and engineering of a BWMS onboard a ship, this can be reduced to 4 months in some cases; anything less than that will lead to quality problems and functional challenges once the BWMS is put to work.

A typical retrofit will start with a survey onboard a ship including 3D scanning; this is followed up by a period of feasibility and detailed engineering, approval by class, pre-fabrication and then installation followed by commissioning. The shorter the time to do the first 2 steps (survey and engineering), the more mistakes will take place and strains on the shipyard that will pre-fabricate and install the equipment. In turn, this will lead to more pressure on proper commissioning and my major concern is that we will see a large number of BWMS commissioned but not always able to meet the requirements that the ships meet the D-2 standard. This is the major concern with the peak and the large number of retrofits we see in the curve above.

As a solution, the following is required:

What this basically means is that the engineering firms must start understanding how BWMS work and the pitfalls of some proposed designs. The drawings must have much fewer mistakes because the yards won't have time to do all the corrections.

Finally, testing for compliance is a requirement coming from the IMO that requires ships to take samples of the treated water and make sure that it actually meets the D-2 standard before the ship receives a Full Term International BWM Certificate.

This is expected to become mandatory for all ships falling under the BWM Convention by 2021, but some flags have already started implementing it; Singapore is one of them. A properly certified lab is required to do the testing.

Considering the challenges on the implementation and the large number of ships we expect to retrofit BWMS at the same time, we don't expect the full world fleet to become compliant with the D-2 standard until at least 2029, which means that the industry will probably need to do another run of renewal service before BWMS are actually reliable enough.

Above text is an edited version of Mr. Mouawad’s presentation during the 2019 SAFETY4SEA Singapore Forum.

Jad Mouawad is a Naval Architect, graduated in 2005 from the Norwegian University of Science and Technology (NTNU). He has since had several positions in the maritime industry, first at the Norwegian Maritime Administration (NMA), before joining DNV GL where he started and developed their class services for Ballast Water Management.

In 2013, Jad Mouawad founded Mouawad Consulting which has become a major engineering and consultancy firm specialized in Ballast Water Management, with offices in Norway, China, Korea, Panama and Lebanon.

Jad Mouawad issued type approval certificates for more than 11 Ballast Water Management Systems (BWMS) and initiated the development of the first DNV GL rules for installation of BWMS onboard ships. He also contributes heavily to the development of the guidelines of the BWM Convention, developed at the International Maritime Organization (IMO) as an advisor to NMA, and represents Norway in the ISO Technical Committee dealing with standards for BWM.