Lately, the shipping industry is giving a great deal of emphasis on a very prominent topic: Wellness. Wellness is now of great importance to the sector, as having seafarers who feel engaged and positive is crucial to ensure good morale onboard, and focus on operational excellence and safety. However, wellness’s levels differ among seafarers and among specific aspects of the industry. Two of these aspects are the ship type and ship age, which play an important role in the crew’s wellness.

In order to determine how seafarers onboard are feeling, SAFETY4SEA launched the SAFETY4SEA Wellness survey during the last quarter of 2019.

The survey aimed to examine factors regarding seafarers’ life while working at sea and provide a picture to shipping organizations as they actually have very little information about it. The survey gathered responses from 9,768 seafarers, serving onboard 1,072 ships.

To address wellbeing issues, either for seafarers or office staff, a successful approach is needed; strategy, motivation, support, and engagement are the keys towards that end

However, analyzing the results of the survey, we noticed some remarkable factors that affect seafarers’ wellness. Not surprisingly, ships’ type play a major role for seafarers; but except for the type of the ship they are serving, crews seem to also think that the age of the ship is important as well to their wellbeing.

Apart from the general demographic statistics, such as nationality, age, and rank, the type of ships play a key role in wellness. In the following diagram, the participants’ type of ships is analyzed. 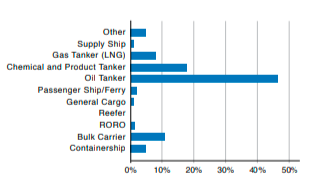 As we can see, most of the participants serve on oil tankers, which form the 46% of the fleet involved.

Chemical and product tankers accommodate the second largest number of seafarers, forming just below 20% of the fleet.

MLC Convention has established several series of minimum requirements, in order to improve seafarers’ life on board. These requirements have created a good working environment for seafarers in relation to accommodation and facilities provided.

Now, the survey reveals that different types of ships provide different opportunities and approaches to crew wellbeing, mainly because of construction issues and working conditions.

Additionally, different types of ships, trading in different ways, such as terminal vs port, provide different opportunities for shore leave and connection with other places and cultures, all over the world.

In order to have a better analysis of survey results, the ship types used teamed into three groups: 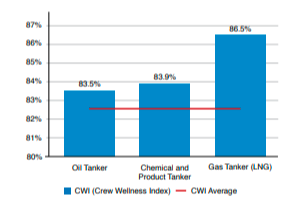 As far as wet cargo is concerned, we see that seafarers serving onboard gas tankers, and especially LNG, are the most satisfied, reaching levels of 86.5%. Chemical and product tankers, along with oil tankers are both above the Crew Wellness Index average, marking 83.9% and 83.5% respectively, but are below the satisfaction level of gas tankers. 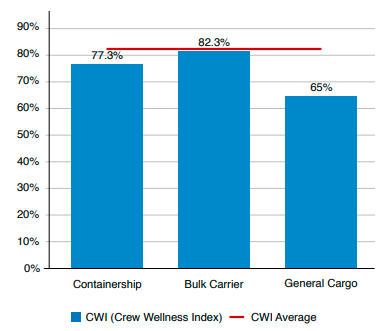 Regarding dry cargo and container, satisfaction levels fall below the CWI average. As seen from the graph above, all three of the categories fall under the average line, with bulk carriers however, noting the highest score of crew satisfaction with 82.3%. Containership falls even more below the average with 77.3%, while it seems that more efforts should be made to enhance wellness at general cargo ships, as they report a very low score of 65%. 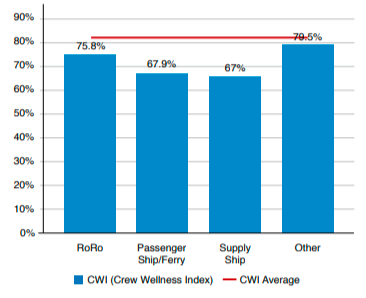 Regarding other cargo, the numbers are similar to dry cargo and containers. All of the categories find themselves below the CWI average, with RoRo having the largest percentage of satisfaction, with 75.8%. Passenger ship/ferry and supply ships are ranging at very low levels, like general cargo does, with 67.9% and 67% respectively.

Wellness per Most Common Ship Type

As shown in the following chart, the most satisfied seafarers serve on board Gas Carriers, with satisfaction level of 86.5%. Gas carriers are considered as the most modern-designed cargo ships. The majority of them are new vessels with high accommodation standards and crew members working onboard that type of ships generally receive higher payments than other types of ships. Therefore, the working environment seems to offer a high level of satisfaction to seafarers and high wellbeing status.

On the other hand, containers are also modern ships, and payments are also relatively high. However, seafarers onboard these ships show the minimum level of satisfaction, with 77,3%. Probably the reason for this is the tight schedule times, the minimum port stays, and the difficulty on a day to day operations onboard a container ship. 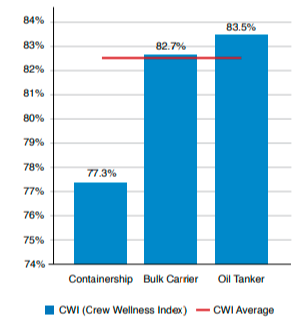 The crew participated in the survey mostly serves onboard young ships, namely below 10 years old). As it is revealed by the answers, crew serving on oil tankers aged 6 to 15 years old had the highest representation.

As said before, except for the type, the age of the ship plays a significant role in crew satisfaction. In fact, crew members that serve onboard new ships find their working conditions to be more convenient because of the fact that vessel’s systems and conditions are functional with less maintenance requirements. This provides more free time for other activities that can improve the wellbeing satisfaction.

Practically, seafarers onboard ships from 0 to 20 years old show a satisfaction level very close or above average (82.6%), except those serving on board very old ships more than 20 years old 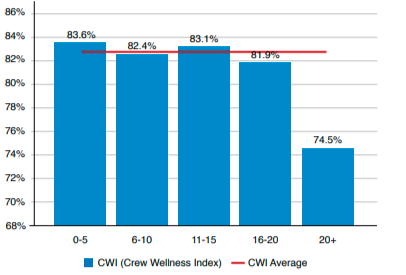