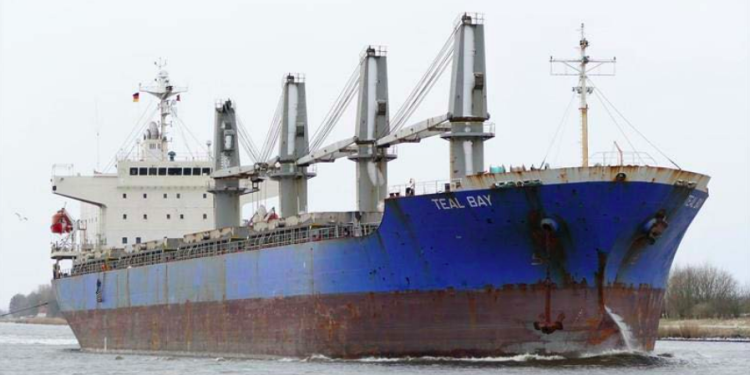 The fatal incident on the MV Teal Bay has highlighted some age-old issues with regard to mooring safety, argues John Southam in SeaSense column, our special column in association with the North P&I Club.

The Teal Bay was alongside an anchored bulk carrier to load corn via an STS operation. To allow the crane grab to reach the final part of the forward hold, the Teal Bay was required to move forward 2 to 3 metres. During the move the Chief Officer was fatally wounded by the aft spring line. The line was run through an open roller fairlead as opposed to a closed fairlead, so once the line was under tension, due to the upwards angle of the line, it sprang out of the fairlead striking the Chief Officer.

The UK Marine Accident Investigation Branch (MAIB) final report on this incident was recently published, and in their conclusion they included the following issue:

There was insufficient planning for both the mooring and the warping; this happened because, for both evolutions, there was a lack of time available to plan and the crew was unfamiliar with STS bulk cargo operations.

This provides an opportunity for us to revisit this important planning process.

Mooring operations, whether for alongside a quay, STS operation or simply warping the vessel, require the forward and aft mooring teams and the bridge personnel to work together. Therefore, to safely carry out any mooring operation it is critical that all parties work together closely and communicate effectively. This applies to the initial mooring, departure and of course any intermediate changes to the mooring arrangement.

According to the MAIB’s findings, the Teal Bay had no procedure for STS operations. The practise of STS offshore on bulk carriers in growing in popularity as exporters want to ensure more cargo can be shipped on bigger vessels even where ports are too small to contain such vessels. As such, the SMS should include a procedure for STS operations and the Master should always check the company and any local requirements for STS transfers as part of the planning process.

When planning an operation such as an STS, it is critical to consider the number and experience of people required for each mooring party. This is influenced by factors such as the size and number of lines in use, sight lines between from the mooring deck, line handlers and winch operators and the size of the ship’s complement.

Each mooring party should have a responsible officer in charge of the operation who has a clear means of communication with the vessel’s bridge team. Consider whether the crew have the relevant training and practical experience needed to make the job smooth and safe.

If the vessel is performing STS operations, a fully documented method statement should be prepared. This should cover all stages of the operations including but not limited to:

Think about the full operation and ask: “what could go wrong?”. Draw up detailed contingency plans that contain the actions required by the vessels and the crew involved. There may be already some contingency plans included in the vessels SMS; they should be referenced to assist with planning.

After the steps set out above have been completed, all parties involved should meet to discuss and agree any changes or improvements. Immediately prior to the operation, the crew should have a toolbox talk to run through their responsibilities and to give them the chance to ask any questions.

It is important to keep accurate records of the entire operation.

Good planning of higher-risk tasks, such as mooring operations, is essential to ensure a successful and safe outcome. Whether that starts with the company and the formulation of clear and correct procedures, or on board with a relevant plan for the specific mooring operation, always remember that prior preparation prevents poor performance.

The MAIB report of the Teal Bay can be read HERE